Last week we were down in Texas. I did not attend a medical conference. It was not for a vacation or leisure trip either. I was there for some very serious work.

My family and I volunteered to join Your Best Pathway To Health (YBPTH), a non-profit organization that provides a free mobile mega clinic. There were medical, surgical, optical, and dental services offered, all free of charge to patients. There were also mental health, physical therapy, massage therapy, haircuts, financial planning, and lifestyle counseling among other services provided in that event. (See their Facebook page here.)

It was our first time to join this organization’s humanitarian mission, though they have already served in many other cities in the past, like Los Angeles, San Francisco, San Antonio, and Phoenix. This year it was held in Fort Worth, Texas. The free services were offered to people who could not afford medical care or had no medical insurance. 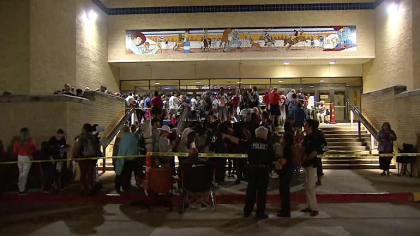 In this event, people started lining up outside the building even the night before the clinic opened. I felt bad for the people who lined up for many hours, only to be told that they have to come back the next day as we were already full for the day.

Though if one clinic was full, for example the dental clinic, which appeared to be the service that most people lined up for, then we suggested to them that they go to the medical or vision clinic instead. Yet, there were still some, that sadly to say, we had to turn away completely, for we just could not accommodate them all. The mere number of people who lined up and were willing to wait several hours in line substantiates that there is a great need for these kind of services.

The event was held at the Will Rogers Auditorium in downtown Fort Worth, which was converted into a mini-hospital, complete with operating suites. Minor surgeries and even cataract surgeries were performed here too.

There were dentists, optometrists, ophthalmologists, internists, family practitioners, pediatricians, OB-GYNs, an ENT, orthopedists, podiatrists, a cardiologist, and a GI doctor present. I was the lone pulmonogist in the team. Below is a photo of my own cubicle.

Since consultation to the Pulmonary Department was not that overwhelming, I assisted also in the Primary Care Clinic, as they were swamped with many patients there. Afterall, I am an Internist still. I probably have done more breast exams (for patients with breast lump complaints) and rectal exams (for patients with rectal bleeding complaints) in that 3 days alone than what I have done in the past 10 years of my practice now as a lung specialist. I declined to do PAP smears though and referred those patients to Women’s Health, as I have not performed that since I was in residency 20 years ago.

At the end of the event, in my estimation, I was able to see 100 to 120 patients. It was tiring to say the least, yet it was fulfilling.

We knew that there would be no monetary payment when we joined this mission. The only thing we got for free was lunch, which by the way was also provided to all the hundreds of patients seen. We even had to pay for our own airfare and hotel, and use our own vacation time to join this event. But the smile, or the simple “thank you” from the patients, and the satisfaction that we helped somebody was enough for our reward.

Yet to say that I did not receive any payment at all would not be true. There was one patient who gave me a large bar of chocolate as a present, and another one gave me a freshly home-baked loaf of bread. Those simple gifts were more valuable than my professional fee.

My wife was assigned in the Vision Department, assisting in the Optical services, and they were even busier than the medical department. My son, who is 15 years old, was in the Patient Assistance and Transport Department, and he probably was the busiest among us three, as he was walking and accompanying patients into the different clinics the entire duration of the event.

The clinic ran for two and a half days, and at the conclusion of the event, the final report was that we had seen a total of 6,805 patients. That was an impressive number of people served.

Many local news media covered this event, so we were instructed on how to answer questions in case we were interviewed. As you know, health care is a hot political issue in this country, and an overzealous reporter might drag us into answering a touchy subject. 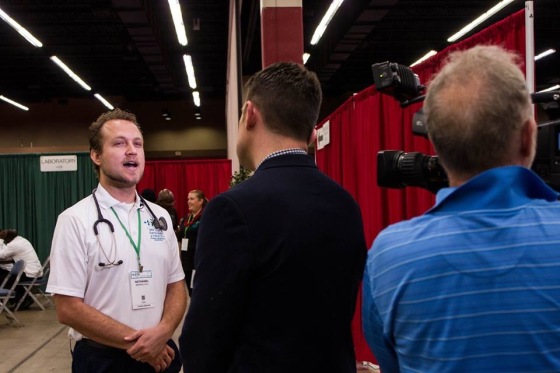 We were directed that we should avoid any political statements, and that when we were asked why we had volunteered and why we were giving all these medical services for free, our answer should be: Because we wanted to be the hands and feet of our Lord Jesus. Nothing else.

In truth, that was really the very reason we volunteered. To God be the glory!