(This message was delivered during a local church’s gathering on New Year’s Eve.)

In a few hours, we will be saying goodbye to this year and we’ll be embarking on a new year. Happy New Year!

The month of January is named after the Roman god Janus, the god of beginnings and of endings, and transitions. He is usually depicted as having two faces, facing back to back, one looking at the past and the other one looking at the future.

At this particular crossroad of time – the end of the old year, and the beginning of the new year – perhaps that’s what we ought to do: to look and evaluate the past, but also look and plan for the future.

Earlier this year, we were blessed with a trip to the Holy Land. We visited a place called Mount Nebo, which is located near Madaba, Jordan, or in Biblical times it is known as the land of the Moabites. The mountain is pretty high that it provides a panoramic view of the surrounding areas around it, including the land known as the Biblical Canaan.

As we were enjoying the view, the tour guide was giving insights and explaining the significance of this place to our group, while another group near us was having a devotional and they were singing the hymn “I am bound for the Promised Land.”

Where we were, is the place where Moses stood. And while Moses was looking at this same horizon that we were viewing, perhaps he was looking back at his life. But God also let him see the future and showed him the entire Promised Land, and the specific areas where certain tribes of Israel would settle. Since he was able to see details (recorded in Deuteronomy 34) that can only be seen with powerful binoculars, I believe God miraculously let him see Canaan with an assisted vision.

Yet the irony of this is, Moses never set foot in that land, for he died and was buried there in Mount Nebo. 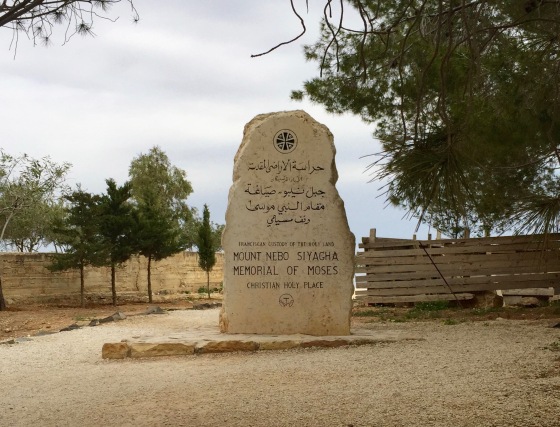 Moses, the chosen liberator of Israel, who led his people out of Egypt, and who dedicated his life leading the Israelites to enter Canaan, was not allowed to enter it. So unlike the song, Moses was not bound for the Promised Land.

Was Moses a failure then? Not at all!

Perhaps you’re thinking that you should have graduated from college by now, but instead you still have a couple of semesters to go since you shifted course. Or perhaps you’re thinking that you should have that high-paying dream job that you always wanted, but instead you’re stuck in a job you don’t really want. We may have started to work on a project, and now, it is still a project!

Friends, what we fail to understand, is that God may have some other plans for us. That God has a different destination for us, and we have just not realized it yet. Or God could have appointed you to begin that task, and He appointed somebody else to finish it. Just like in the case of Moses, where Joshua took over for him.

More importantly, when Moses stood there in Mount Nebo, while looking at the Promised Land from afar, he did not complain on why he was not allowed to enter the land that is promised to his ancestors, a land that was described as “flowing with milk and honey,” a destination I’m sure Moses wanted to be a part of. Instead, he humbly accepted God’s plan for him.

Moses may have not entered the Promised Land here on earth, yet God took him to a far better place, which is in heaven.

Jeremiah 29:11 – “For I know the plans I have for you,” declares the LORD, “plans to prosper you and not to harm you, plans to give you hope and a future.” (NIV)

As we set our goals for the coming year, may we not forget that all our plans here on earth are just temporary, for our ultimate destination is the Promised Land, the heavenly Canaan.

God bless us all, and again Happy New Year!