(I was asked by my aunt in California to give an inspirational message for their virtual church. Here is what I shared.)

It is October. In only a couple of months, this year will end. And what a difficult time it has been this year 2020 to many of us, if not to all of us. I know many of us would rather forget this year and just want it to go away. The funny thing is, this year could not even claim the notoriety it will be known for, as COVID is named COVID-19 and not COVID-20.

The past several months was a constant struggle. It was a like an unending mountain climb. It was one challenge after another. However, these mountains of challenges can strengthen us and can fortify our commitment.

In 1923 when a reporter from New York Times ask George Mallory, an English mountaineer, why he wanted to climb Mount Everest, his answer was simple. He said, “Because it’s there.” What he’s saying is, it was there waiting to be conquered.

Mallory’s first 2 attempts to climb Mount Everest end up in failures. But he did not give up. On his 3rd expedition to climb Everest, he never came back. He and his companion was last spotted in an upper ridge about 250 meters below the summit. Did he finally make it to the summit? We don’t know, for he did not survive to tell us the story. One thing for sure, he is committed to his cause.

There are some stories in the Bible of people who went up the mountains. One of them is David. But David did not climb the mountain for mountaineering nor for physical recreation. He ran to the mountain to escape and to save his life. This was during the time when he was running away from King Saul who wants to kill him. We can say that David was going through a difficult time in his life. One of the places he stayed is the wilderness of Ein Gedi, where there are rugged hills and stony cliffs.

I look up toward the mountains.
Where can I find help?
My help comes from the Lord,
the maker of heaven and earth. Psalms 121:1-2

For us Christians we should view these mountains of challenges in a different perspective. These difficult trials provides us the chance to realize that God never leaves us and it gives us the opportunity to witness how powerful our God is.

When I was growing up in Sampaloc Manila, I have posters on the walls of my tiny room. I could have a poster of my favorite basketball player Robert Jaworski. I don’t know if any of you even knew him. Or I could have a picture of a famous movie star. My favorite during my high school days was Phoebe Cates, but I didn’t have a poster of her either. Instead, my posters are photos of beautiful landscapes with inspirational message in them.

The poster beside my bed was a photo of a huge rock mountain. It is actually a butte that towers over a plain. I did not know at that time what mountain it was and where it was until I came to the US a decade and a half later. I found out that the rock mountain on my poster was aptly named the Devils Tower, and it is located in Crook County, Wyoming. On my poster, underneath the photo of this rock mountain are this words: Faith moves mountains.

Yes, my brothers and sisters, there are no mountains high enough that the devil can throw in front of us that our God cannot move.

Matthew 17:20 – “Truly I tell you, if you have faith as small as a mustard seed, you can say to this mountain, ‘Move from here to there,’ and it will move. Nothing will be impossible for you.”

Few years ago, we were blessed to visit Israel. During one of our trips our bus was traveling to Bethlehem, and I saw that Bethlehem was a hilly region. I could only imagine that in one of those hills are where the shepherds were when the angels appeared to them. But the tour guide asked us to look beyond Bethlehem hills and direct our sight to a strange-looking mountain in the distance. It was truncated and cone-shaped.

It was a strange-looking mountain because it was man-made. The mountain was named Herodium, a fortress that Herod the Great constructed, about 5 kilometers southeast of Bethlehem. This was the same King Herod that tried to kill Jesus by slaughtering all the male infants in the region.

As history recorded it, when Herod the Great, was searching for a place to build his home and fortress, there was not a mountain high enough for him to build this structure. Instead there were two hills near each other at the site where he wanted it.

So what did Herod do? He cut down one hill and with an army of laborers he placed the pared hill on top of the other hill to make it higher, one bucket of dirt and rocks at a time. He literally moved a mountain.

When Jesus and his disciples were having discussion about faith, they were probably looking at this Herod’s mountain, which was hard to miss in the Judaean desert. Its dominating presence was a constant reminder of an oppressive yet very powerful regime. It was a common knowledge of that time how Herod moved a mountain.

Yes, our God is powerful and He can move mountains. And if we have faith in Him there should not be any mountain of challenges that we cannot conquer.

May God bless us all.

(*photos from the web)

My son cannot help the urge to climb when we pass this barren terrain on our way to Mount Rushmore recently. Can you spot him? 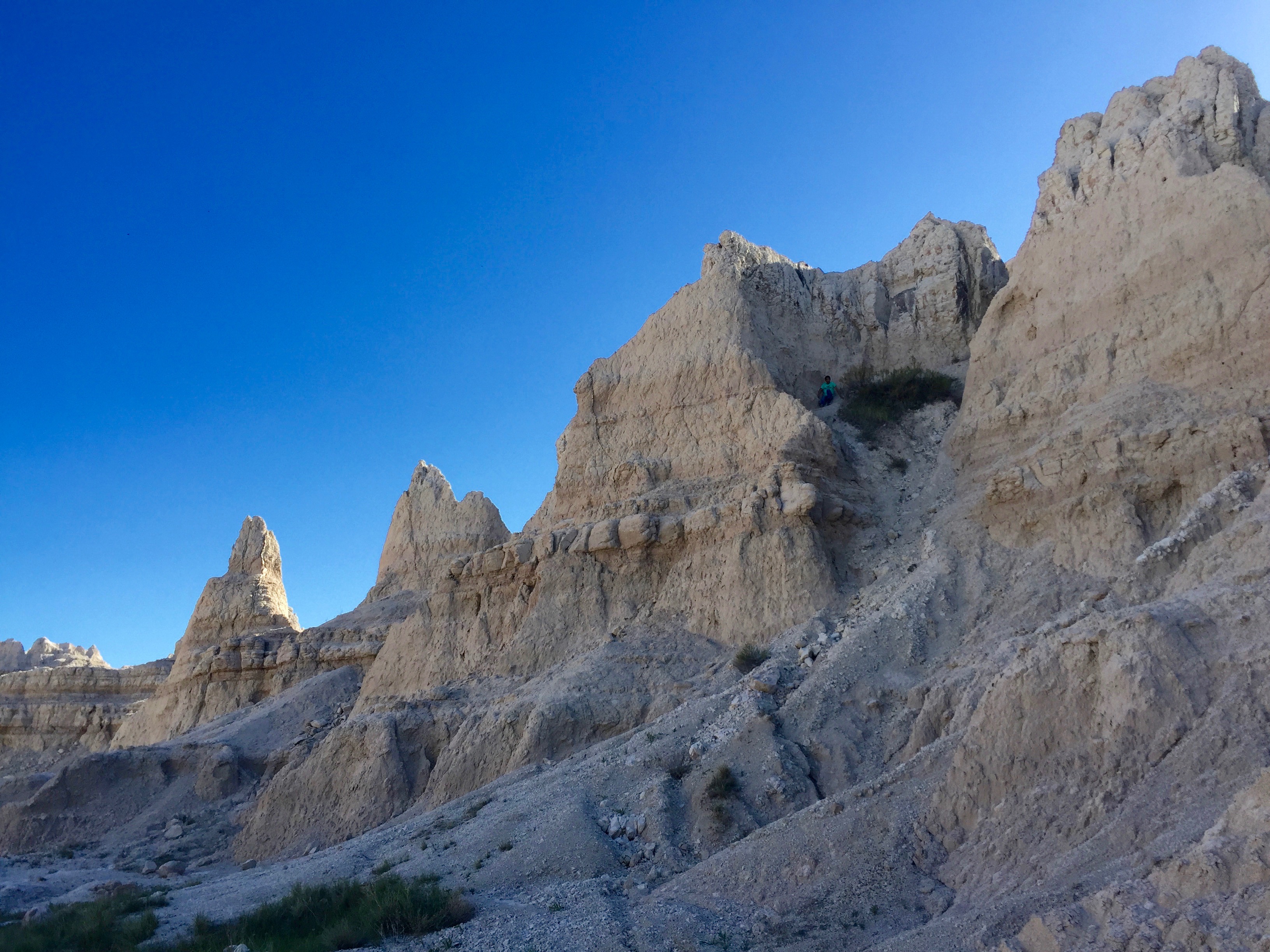 During our recent trip through South Dakota, we passed over Badlands and Black Hills. Mount Rushmore, which is part of the Black Hills, is perhaps the most popular National Park in this region. 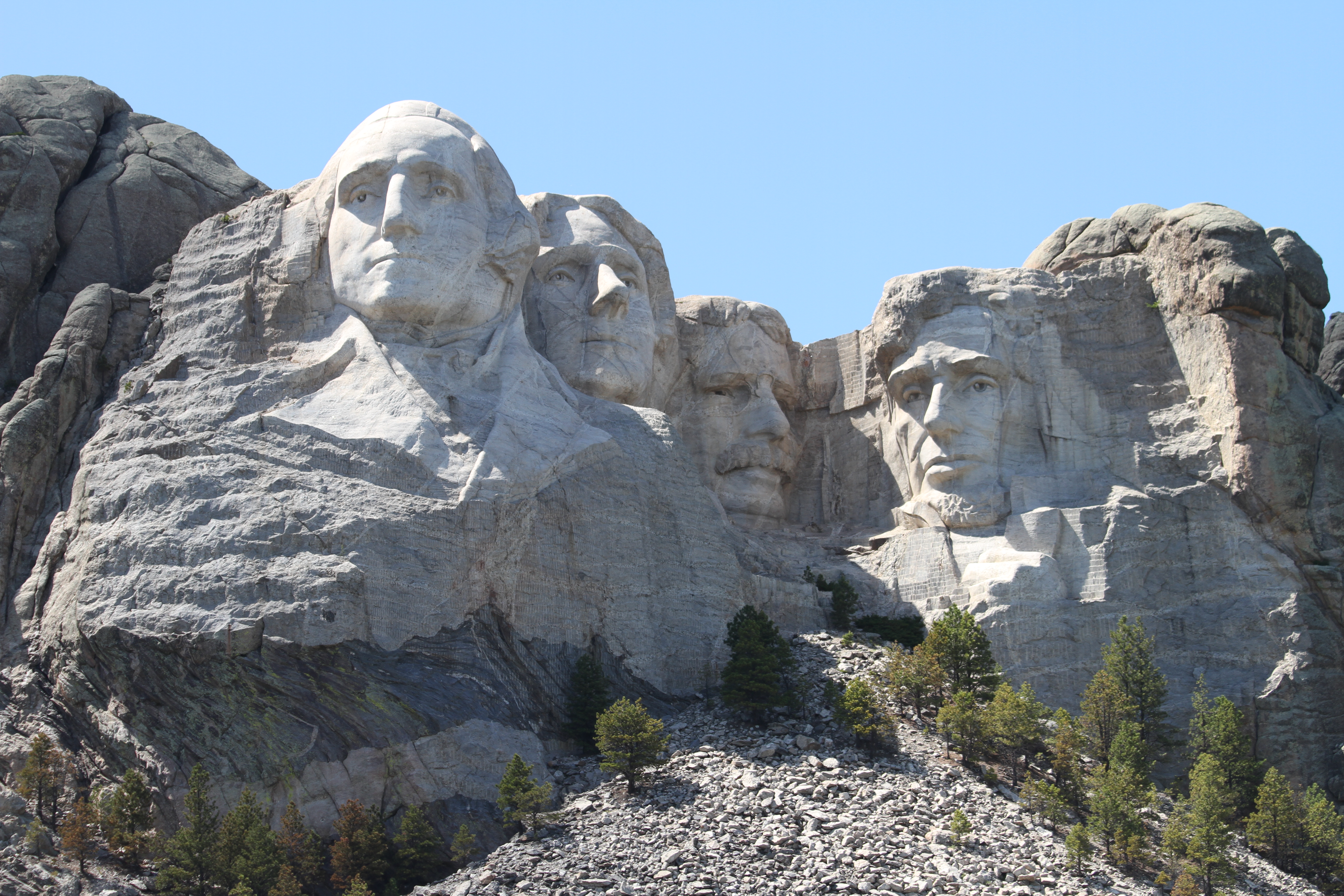 Faces of Washington, Jefferson, Roosevelt, and Lincoln on Mount Rushmore

Though the Badlands National Park, has its different appeal and beauty as well. 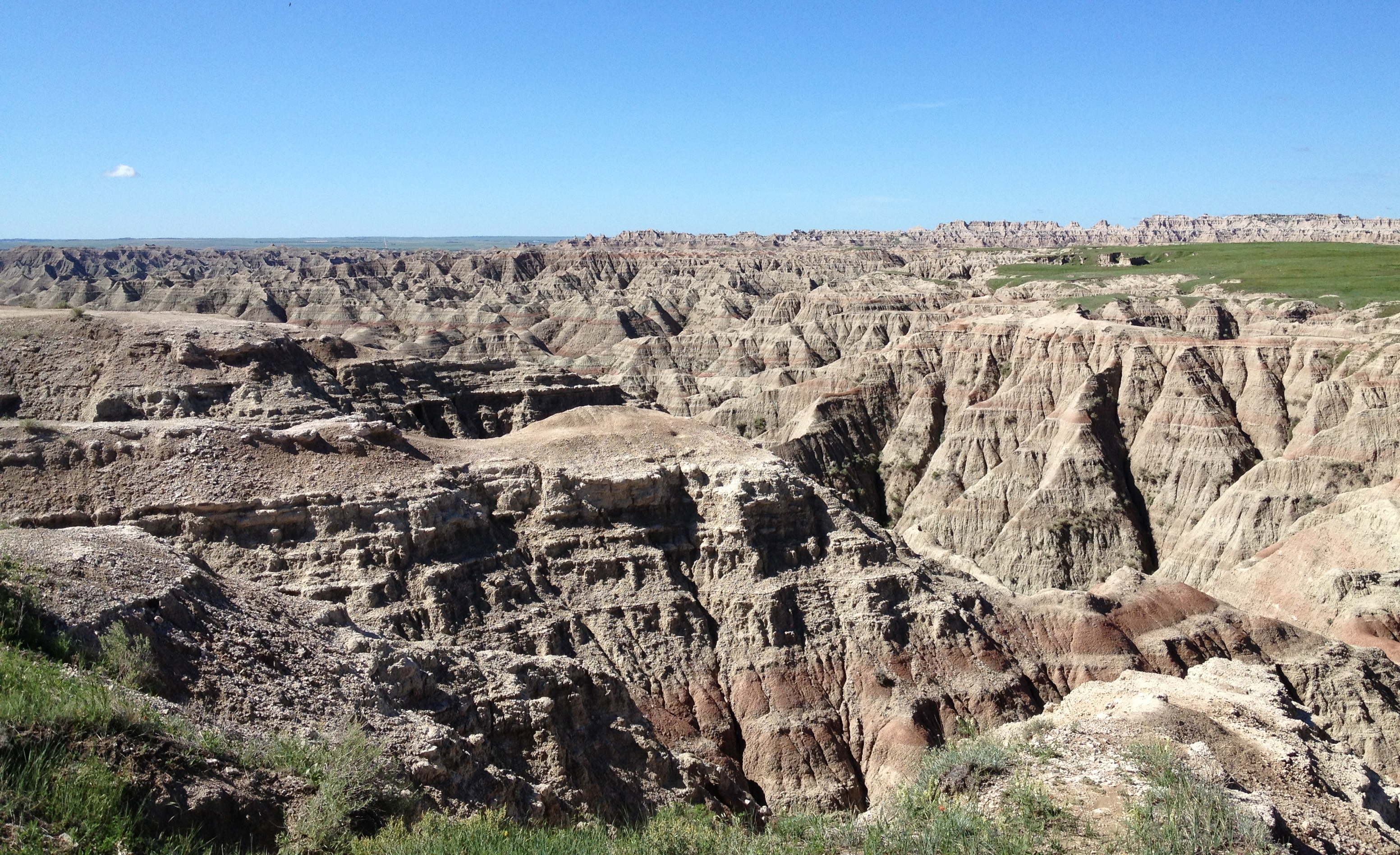 Native to this mountainous terrain is the mountain goat. This creature is agile and sure-footed, and able to climb on steep rocks with grace of a ballerina and steadiness of an experienced rock climber. 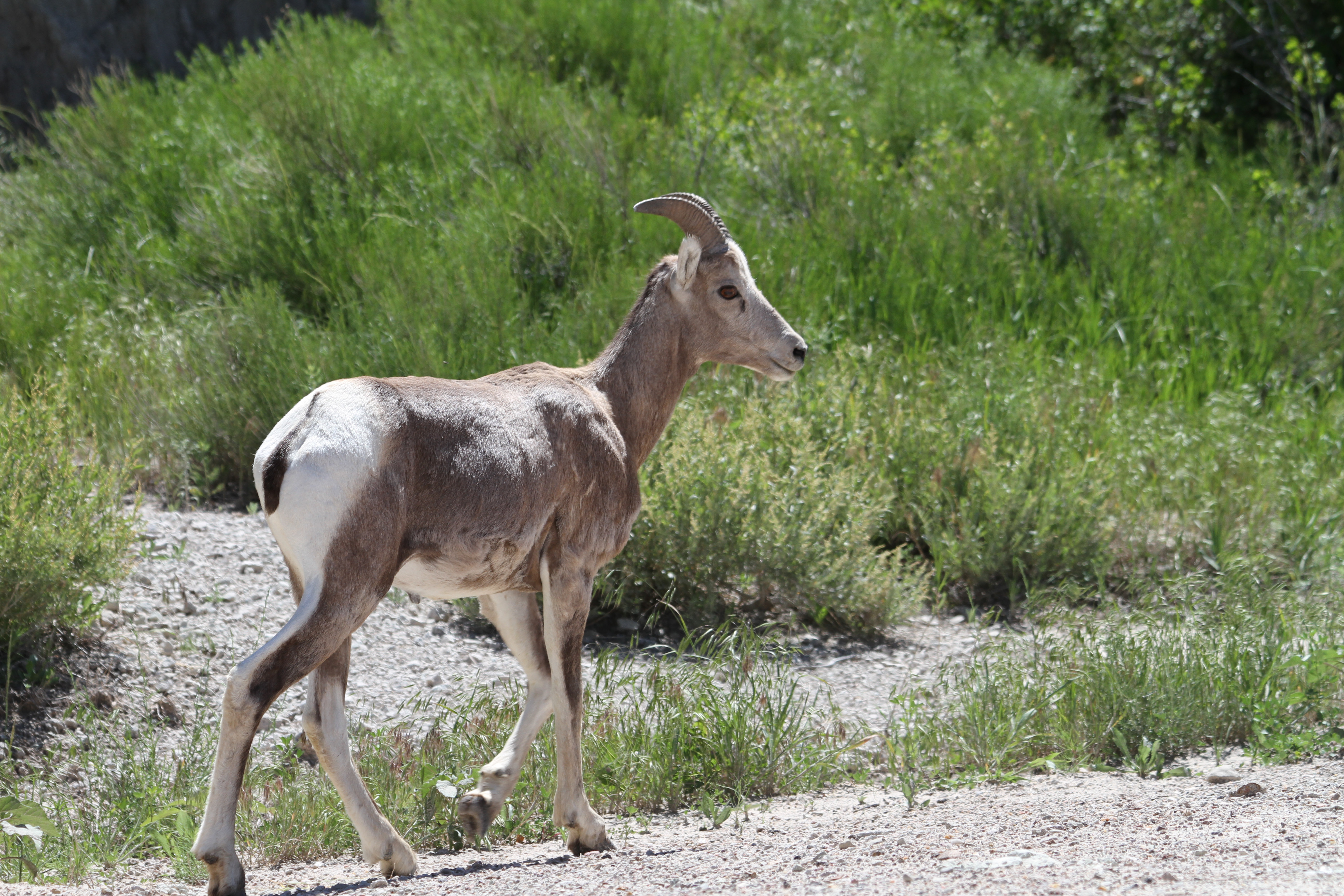 We were fortunate to see one. I mean the mountain goat in above’s photo, not the one below. 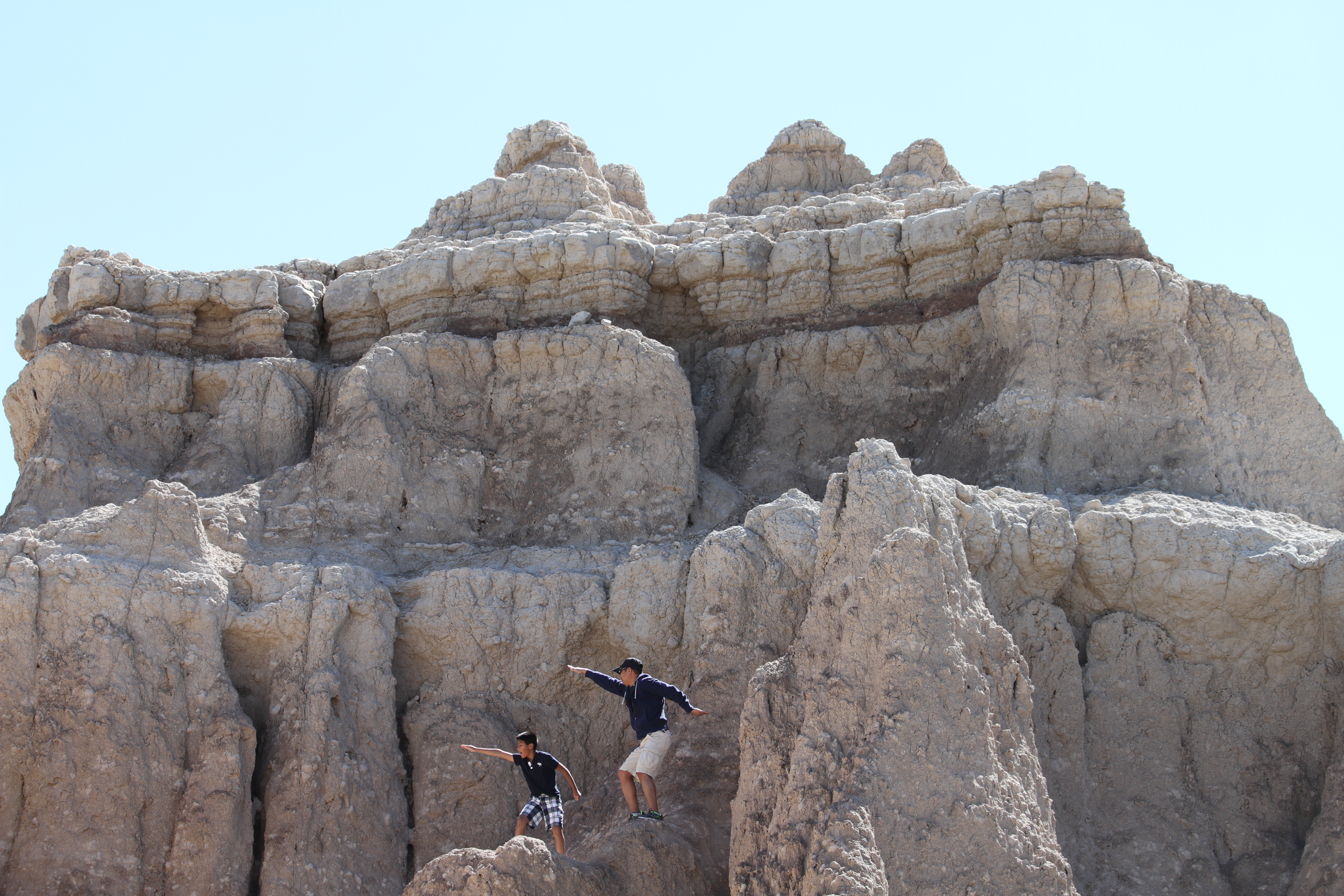 Not to be outdone, and getting inspiration from the mountain goat, my son and I, strutted this “rock-surfing” pose for posterity. 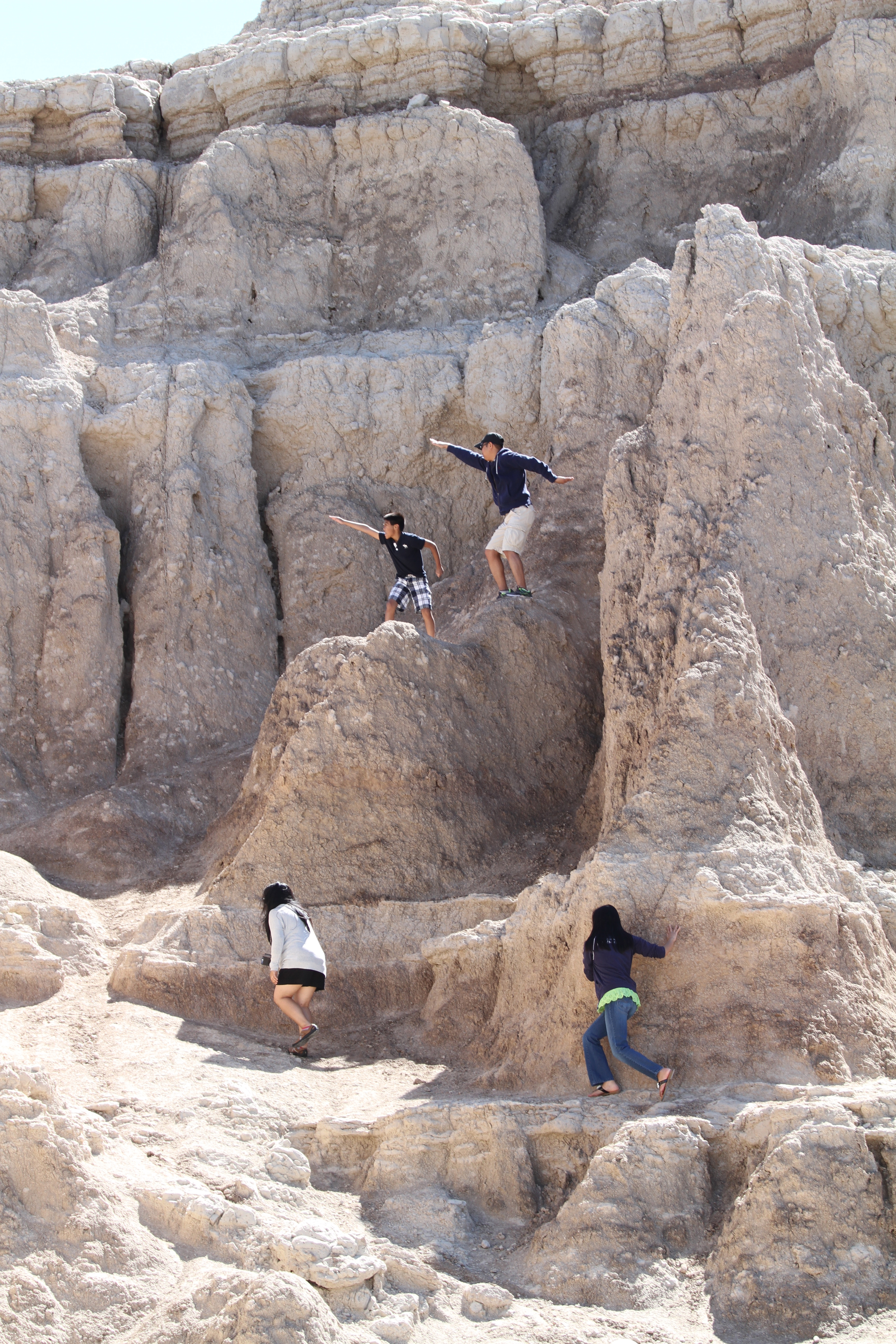 Sorry, the camera did not capture a photo when we dove off the cliff.

Just kidding. Our photographer did not allow us. 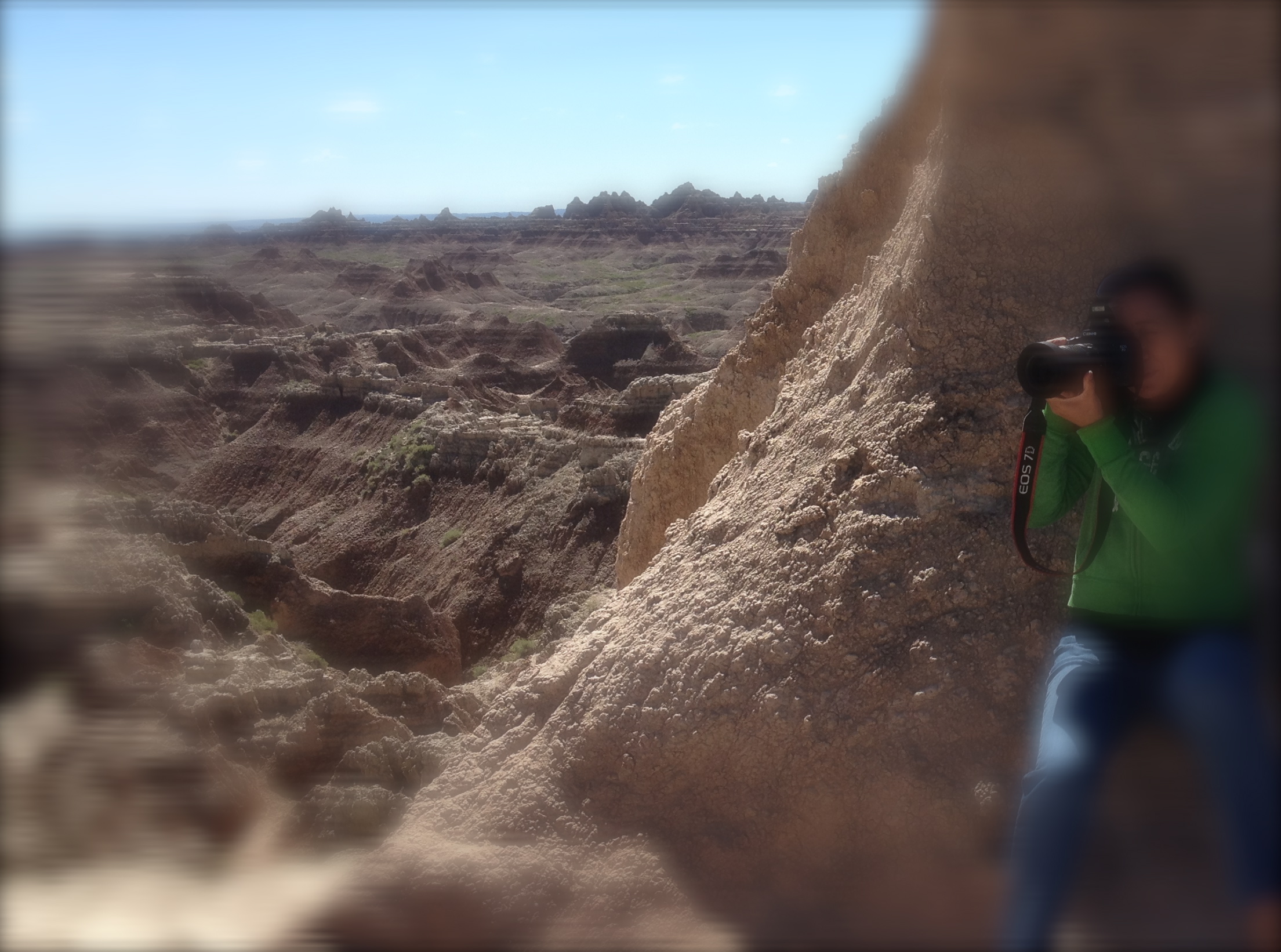