Summer breeze is now blowing here in the northern hemisphere. Yesterday, we had our first 90-degree-Fahrenheit day for the season, and it is predicted that it will be the same today. Summer has arrived in our neck of the woods.

I went out for a run in our neighborhood this morning. Just my usual 2-3 miler run. Nothing extraordinary.

With the warmer air, I felt it was harder to run. Though I am not fond of the cold, I will admit, that running in the colder weather can be better. Personally, I feel that 40 to 60 degrees Fahrenheit is the best temperature to run, especially when doing longer distances.

As I was struggling this morning on a steep uphill climb, but was nearing the top, suddenly a fierce-looking black bulldog came out from a neighbor’s yard.

The dog was not barking. It was just charging towards me!

They say that there are two ways to react when faced with danger. The first response is flight.  But as I said, it was uphill, and it would be very difficult to sprint ala-Usain Bolt. Plus I am not sure I can outrun a charging bulldog.

The second response is to fight. Me fighting a menacing-looking bulldog? But I don’t have my Black Ninja sword with me. Would my Kung-Fu deter this attack dog?

Confronted with danger or in an excited state, the flight or fight hormones (adrenalin and the like) will be secreted by our body. With these body juices rushing, individuals can do extreme feats, like carrying a refrigerator all alone during a fire evacuation, or clearing a high fence on a single bound when being chased by a vengeful lover. 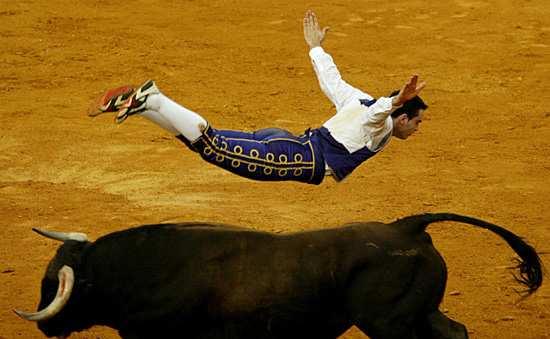 Fight or Flight (as in flying!) response

Well, some people say that there’s another response in facing danger. That is to freeze. Like a deer caught in a bright headlight.

Scientists say that standing still or playing dead is a real mode of defense mechanism. It is employed by many creatures in the animal kingdom. Best known is the opossum. They freeze not just because they are gripped with fear, but rather they are using nature’s way of self-preservation.

And that’s what I did. I stopped running and stood still.

But the bulldog did not stop on his charge. It was rampaging straight for my legs! I saw it open its mean snout……

And then it licked my leg! No bite. Just a friendly lick.

I must be like Kentucky Fried Chicken to that bulldog. Finger-licking, ah, er, leg-licking good!

(*photo from the internet)