The photo below was not taken in some galaxy far, far away, where there’s 3 visible suns in the horizon. This photo was taken by our friend, right here on planet Earth, somewhere in wintry Iowa. 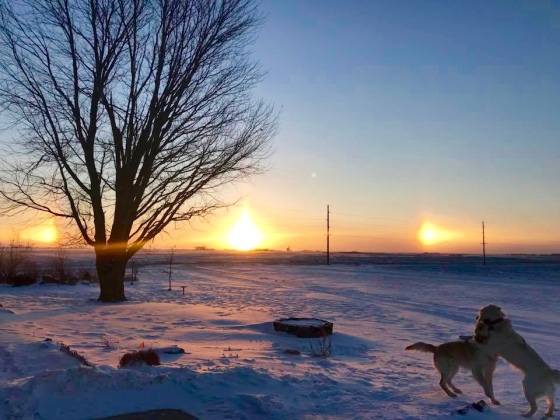 The phenomenon seen on the photo is called sun dogs. No, I’m not talking about those 2 dogs playing in the snow. What I am referring to is those “mirage” sun images on the right and left side of the “real” sun. These glowing spots which are part of a halo around the sun, are created by the sunlight refracting off the hexagonal plate-like ice crystals in the cirrus clouds. The meteorological term for sun dog is parhelion (plural parhelia).

Explaining why sun dogs occur is probably easier, than knowing why it was named so. One explanation is that dog in English can be used as a verb meaning to follow or track. Since the mirage image follows the sun, thus the term. Another possibility according to one expert, is that the term may be from Norse mythology where archaic names from Scandinavian languages, like Danish: solhunde (sun dog), or Norwegian: solhund (sun dog), or Swedish: solvarg (sun wolf), pertains to the star constellation of two wolves hunting the sun and the moon.

I think calling those 2 dogs in the photo above, sun dogs, as they were enjoying the sunlight in this cold day, is perhaps much easier to understand.

(*photo courtesy of my friend)