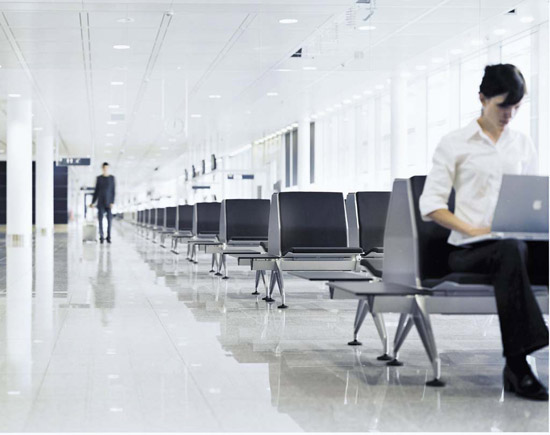 During our last trip, in a layover airport, while waiting to board in our connecting flight: here’s a snapshot of what I witnessed….

The terminal boarding gate was jam-packed with people. Almost all the seats were occupied. People were standing around, crowding the gate and hallways. Some were sitting on the floor as there were no more seats, and some were even lying (they must have been on a red-eye flight) on the ground. Perhaps some had several minutes to wait, while some had hours to kill. The minutes always seems slower in an airport terminal.

Aside from waiting to board the plane, there was also one thing that all were doing. They were either talking or texting on their phones, or typing or chatting on their laptops or tablets.

It is amazing that with our current technology, people can stay connected even how far away we are from home. We can speak, text messages, or on-line chat with our friends on the other parts of the world, even if they are in the international space station, and is literally out of this world. We even have virtual ‘friends’ in our Facebook, where we update them of our status (yes, even what we had for lunch) almost every minute. Or we can tweet messages and broadcast our thoughts (like in world domination) to the world. Or, like me, I can post something in my blog, and people whom I have never met can read and drop me a comment. These are people I would have never known otherwise, except through the wonders of the worldwide network.

I found an empty seat (a rare find!) and sat between two strangers. I pulled out the i-Pad, which we brought, mostly for the entertainment of ours kids during the long flight. I got busy too, checking on my ‘friends’. Sometimes I would lift my head and look around to the people around me, but all of them were absorbed, busy talking, and with their ear on the receiver of their phone, or their eyes transfixed on the glowing screen of their phone or computer, and their fingers preoccupied typing.

Then, a thought hit me. All these people cramped in one room, were all engaged in talking and communicating…….but not to each other.

Isn’t it ironic that the network that keeps us connected, also makes us isolated.

* (above image from here)