Iowa is a bicycle-friendly state. All over the state are paved routes that are interconnected which are especially dedicated for bike riders alone. So whether you are riding for leisure with your family, or seriously training for a bike race, like Tour de France, these routes will suit your need.

In fact Iowa is the site of the oldest, biggest, and longest bicycle touring event in the world, the RAGBRAI (acronym for Register’s Annual Great Bicycle Ride Across Iowa). The RAGBRAI is a 7-day ride through different communities in Iowa (the route changes every year), and averages 60-70 miles course per day. It is not a race though, but rather just a bicycle ride for all level of bike enthusiasts to enjoy. It draws more than 10,000 participants yearly, from all over the US and even from other countries. It is in its 40th year, and the event starts next Sunday, July 22.

It is hard not to take advantage of what our beautiful state offers, so me and my family, together with our friends, would once in a while go for a leisure bike ride.

For much of our bike trips before, I don’t think we rode more than 10 miles at a time. Well, if you are biking with kids, you often get the question, “Are we there yet?” or “How much longer do we have to go?”

Last weekend, the dads decided to make a long (or longer) bicycle ride, without the family and kids in tow. This time it was a men’s outing. We would like to ride farther and faster, without worrying that our children could not keep up with the pace.

We started out from my friend’s house, which was in the outskirt of the city. But before we kicked off we were offered ice cream by his wife, and stated we needed calories to burn. Perhaps knowing that we would be biking for a few miles, gave us a reason to indulge on the frozen treat.

And off we go.

With the excitement of little boys, just like the bunch of pre-teen friends from the 1980’s movie “The Goonies“, we rode our bikes into the adventure that awaited us. It does not matter that all of us were in our 40’s (1 is even beyond 40’s), we were just a bunch of guys trying to recapture our lost youth.

After an hour and half of pedaling, we reached the city of Des Moines.

Once we were in the city we looked for a place to eat dinner, but the eateries that we checked on, were packed with people. We even rode by the hospital where I work and I jokingly told them that we can eat at the hospital cafeteria instead. But my friends knew what hospital food taste like, so they passed on my offer.

After checking a few more restaurants, we finally found one that was not so busy, where we parked our bikes outside and ate in the restaurant’s outside patio. We had a big appetite for we were hungry. I went for the thick burger, which was really good (I mean good for the taste buds, not necessarily good for health).

After gulping our dinner, we headed back home. Since it was growing dark we pick up the pace a bit. As we grind through an uphill stretch, we even thought of stopping at the bus stop and taking the bus home. But we fought off that urge and kept on pedaling.

When we were nearing home, we saw fireworks in the distance. Was the fireworks celebrating our accomplishment and welcoming us home? As we got nearer, we learned that the fireworks was from the local high school stadium, where they were playing the final game of the season, thus the fireworks show. 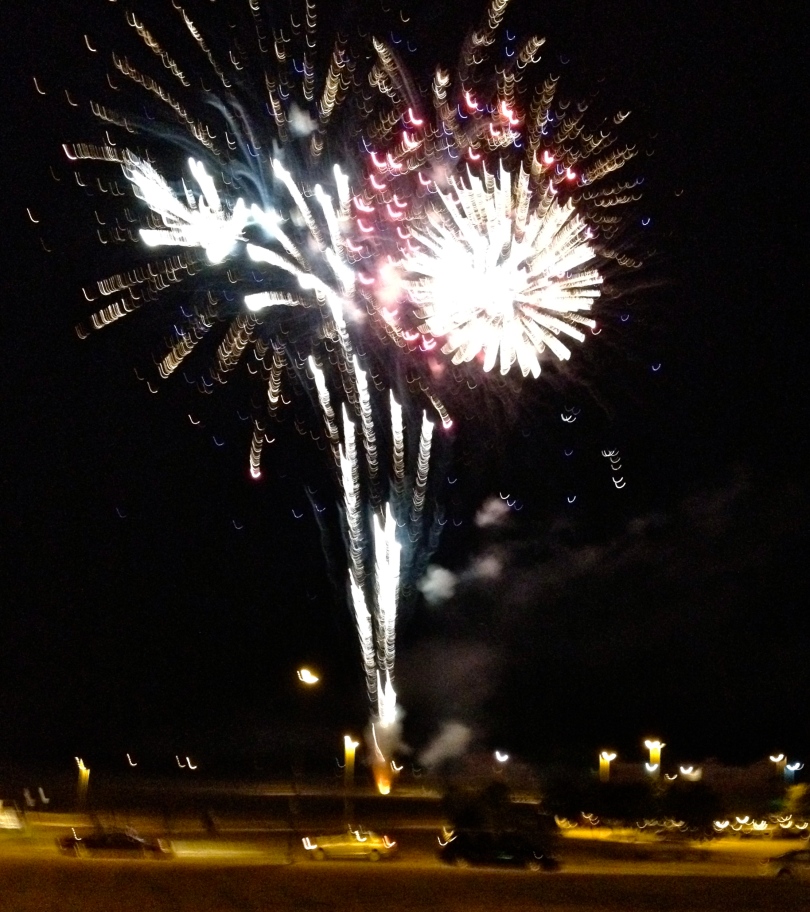 It was already dark when we finally got home. Tired but happy we went inside our friend’s house to cool off, where we were offered ice cream once again! Boy, between the thick burger and the scoops of ice cream that I devoured before and after the ride, I think I only burned 1/4 of those calories by pedaling. But who’s counting?

Overall I think we rode about 30 miles that day. (That is a comparable distance from Manila to Silang, Cavite.) That was good only for half-day ride on a RAGBRAI. But who knows, if we can train enough, maybe next time, we would be riding with the RAGBRAI.

The next morning, I woke up feeling a little stiff, with my behind sore and my thighs a little tight from the bike ride. So to loosen up my muscles, I ran four miles!*

(* I’m on my second week of preparation and training for my half marathon this coming fall.)