A few months ago we got our son a new bike. He is growing so fast that he has outgrown his kiddie bike. He’s undergoing a growth spurt like he’s being stretch, and probably grew a couple of inches this past year. He’ll outgrow a shoe size after only a few months.

And what size is his bike now? It’s a full size bike. Same as mine.

Gone are the days of kid trikes, or training wheels, or youth-size bikes. It seems like it was just yesterday that I was teaching him how to ride, and he won’t let me let go of his bike for fear that he would fall. It also took a lot of convincing before he allowed us to take off the training wheels. Now he’s fearless.

Last weekend, my son and I went out for a bike ride. It was the perfect weather for a ride, not hot, nor too cold, just cool enough to break a sweat under the sun. We rode for about an hour over several miles, through paved roads and dirt roads, and up and down some hills.

We have hybrid bikes – a cross between a road bike and a mountain bike. Light and fast enough on paved roads, but sturdy enough to handle dirt and trail roads.

Before when we would go for a bike ride, I would have to slow down or even stop especially when we ride uphill. Or I will hear him call, “Dad, wait up!” His small legs just cannot pedal fast enough to keep up. 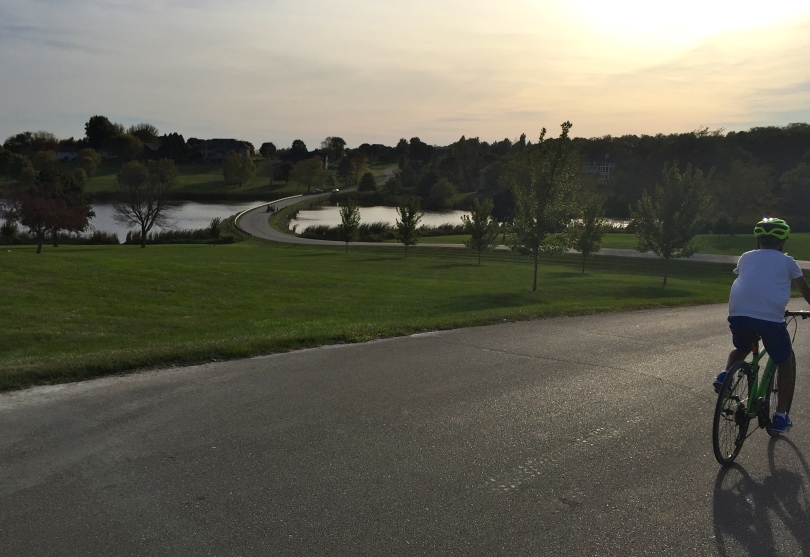 But this time, it was quite different. On two occasions, as we rode up a steep hill, it was him who had to slow down or even stop. Why? To wait for his old man. I am eating his dust!

What happened? Certainly the lots have changed.

I would like to think that it was his bike, which is newer, perhaps lighter, and with more gears than mine, that made the difference, that’s why I cannot keep up with him. But I know it’s more than that.

Or I can use the excuse that I have to stop to take pictures. Or perhaps I just want a slower ride. And maybe stop once in a while to smell the roses. Or sniff his dust?

My son is certainly ascending. While I may be over the hill, though I refuse to admit it. And I’m not even talking about biking.