Nestled between the upper and lower peninsula of Michigan is a place where time stood still. The Mackinac Island, located in Lake Huron, is a popular tourist attraction due to its certain appeal. This place has undergone extensive historical preservation and restoration and is considered a National Historic Landmark. 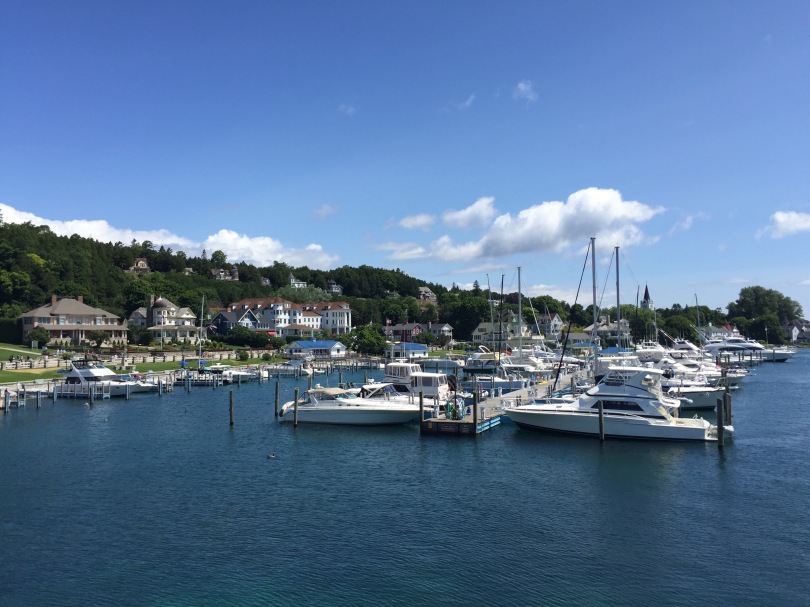 I have heard of this place from a partner of mine when we moved to the Midwest more than a decade ago, but it was only recently that we were able to check this place out.

Mackinac Island is only reachable by a ferry from either Mackinac City or St. Ignace. These are fast hydro-jet ferries and only takes less than 20 minutes to get into the island. 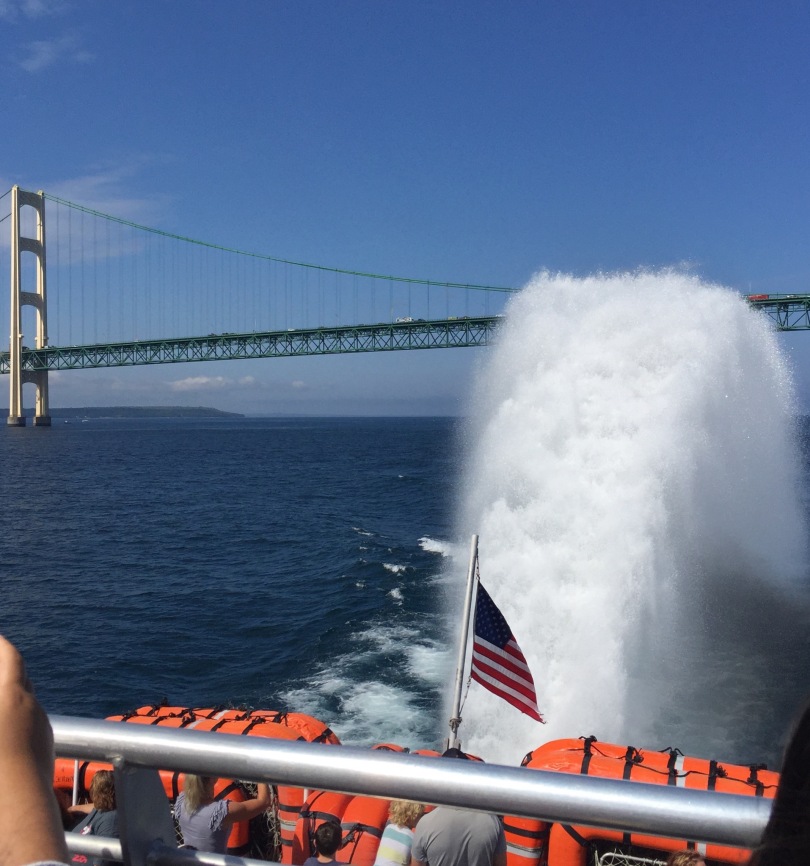 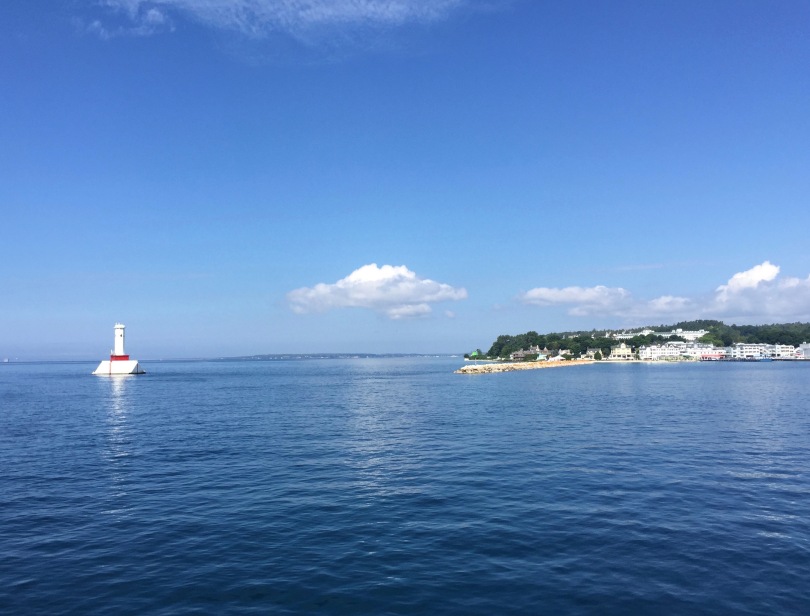 As winter can be brutal in this part of Michigan, most businesses on the island, hotels included, are only open from May to October. Though there are residents that stayed on the island even through the winter.

Visiting Mackinac Island is like walking back in time, as houses and buildings are mostly built from the glorious era of the past, or at least they are made to look that way. 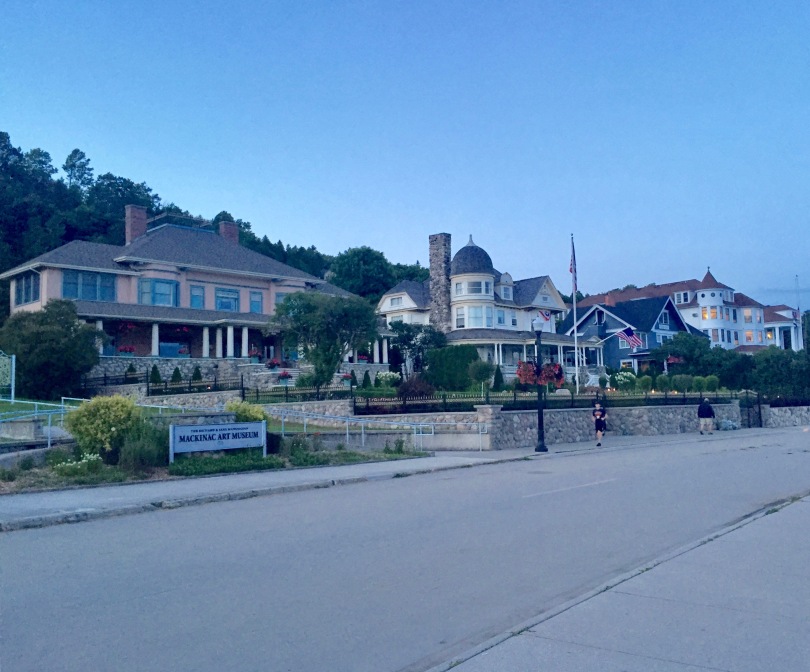 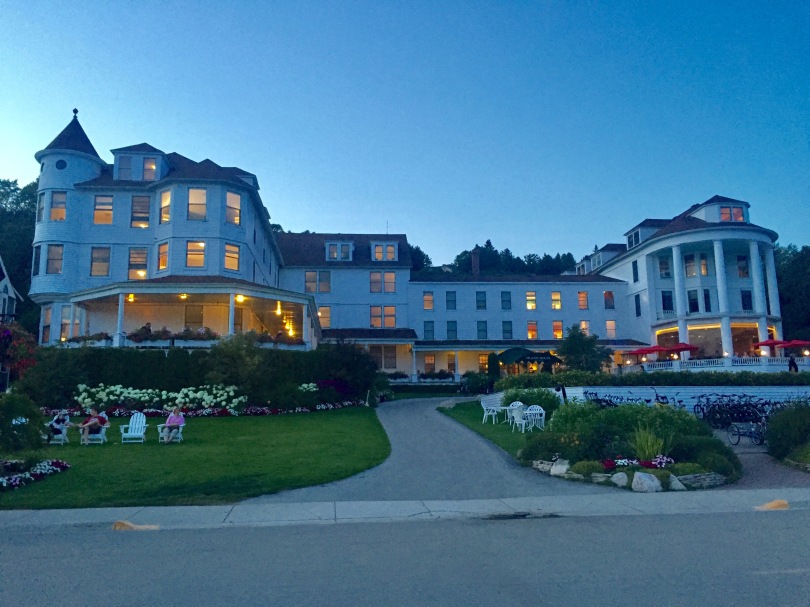 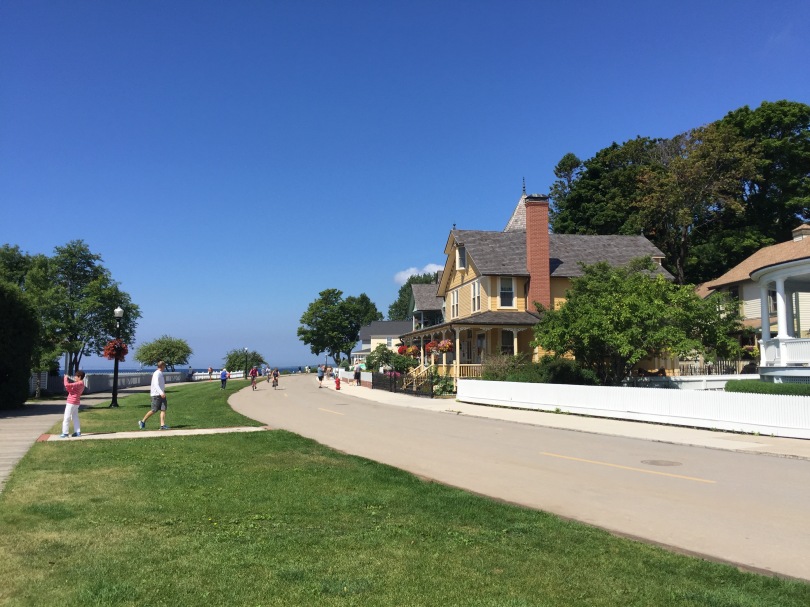 The island is not only for history fans but also attract nature lovers. There are lots of beautiful sights to enjoy, either cultivated or natural. 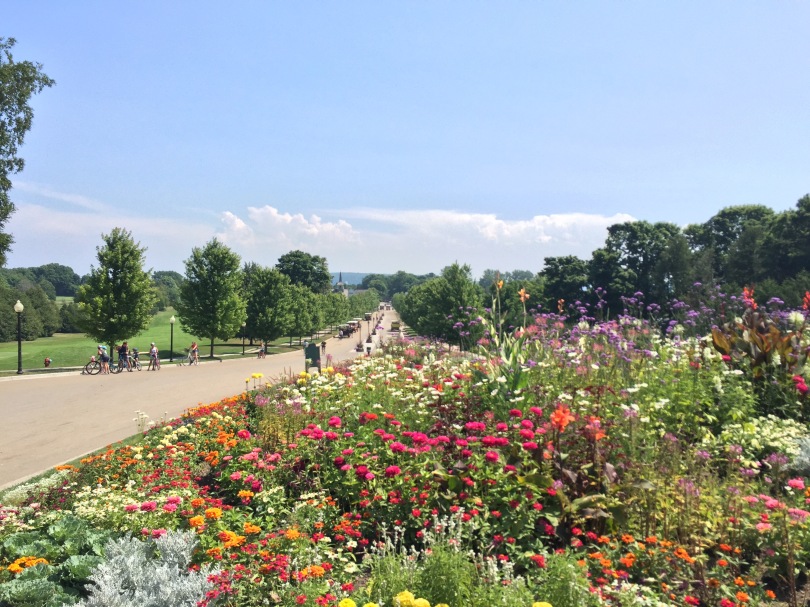 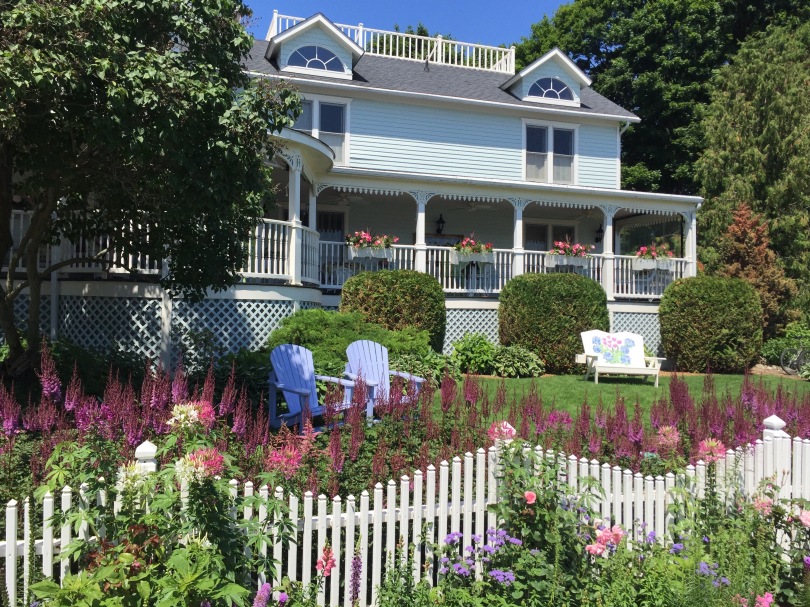 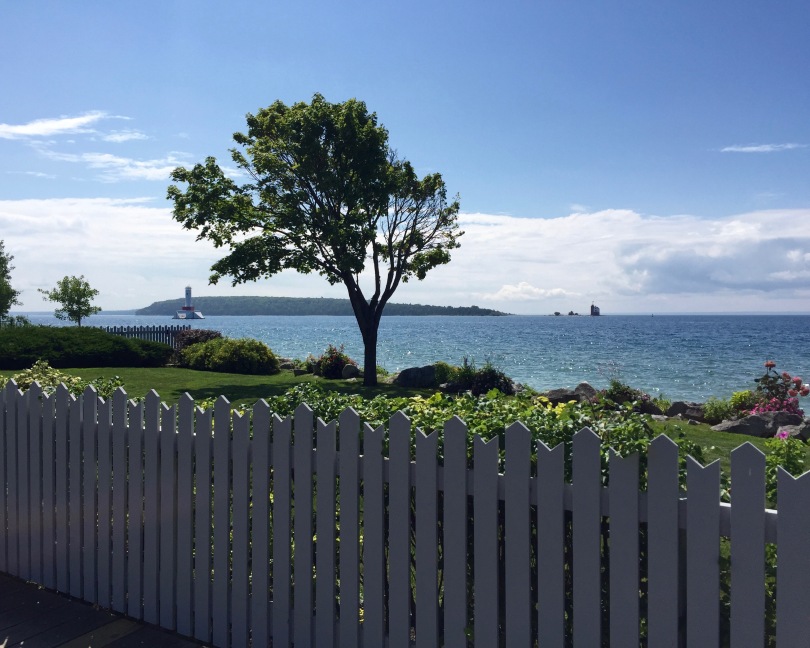 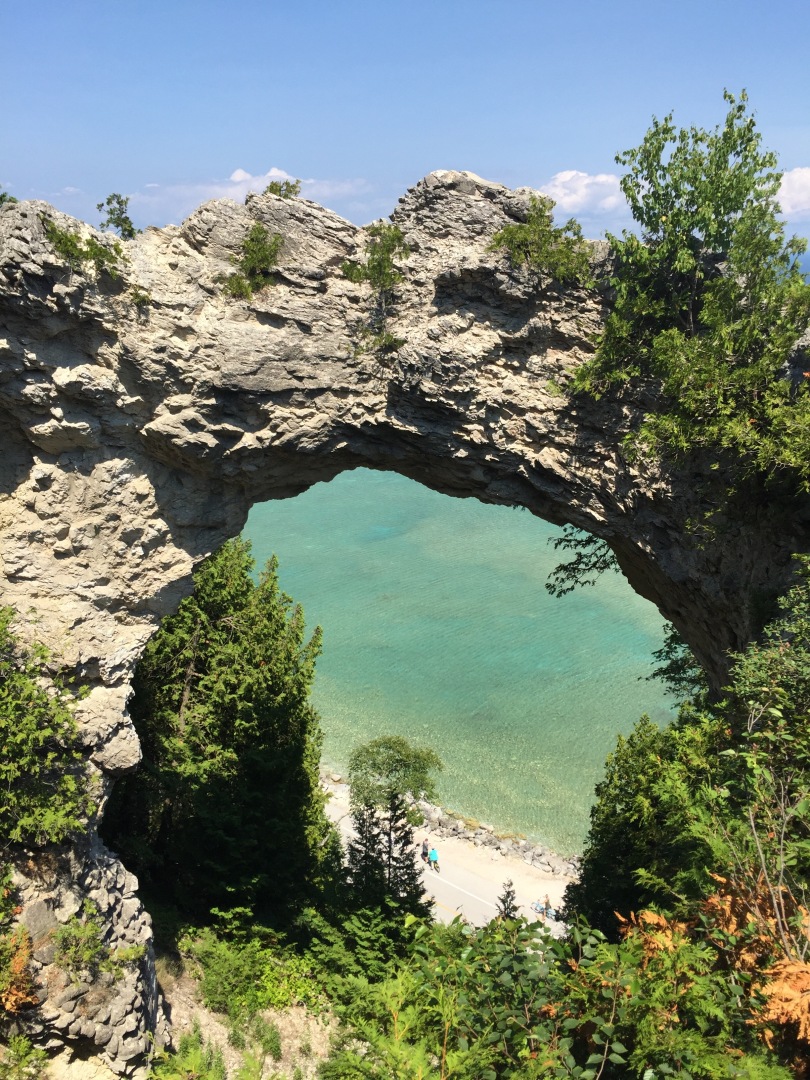 Tourists who visit Mackinac Island are called “fudgies.” I believe the reason for this is that the island has several fudge stores, and all of them offer free samples. So the tourists definitely take advantage of this, us included. But we also brought some home, as we felt obliged to buy after sampling a lot of them.

One of the most unique feature of the island is that there are no cars here. All motorized vehicles are banned on the entire island since 1898. There are only three motorized vehicles in the island: an ambulance, 1 police car, and a fire truck. So to get around, you either walk, bike, or take a taxi. Of course the taxis are horse-drawn carriages. 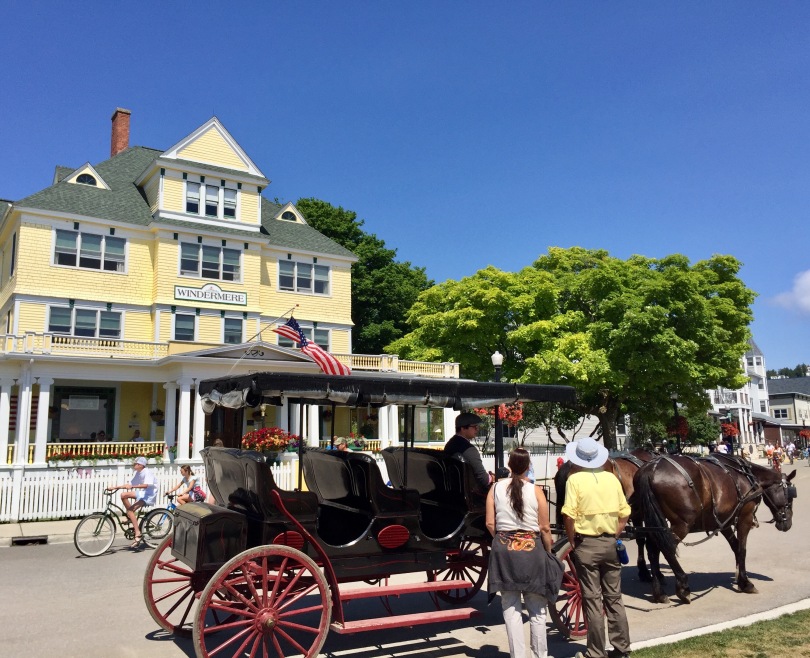 When you’re on the island, time is not an essence. People here take their time leisurely. And even if you are in a rush, you cannot hurry the horses. The horses rarely trot, and most of the time they walk. They don’t gallop. If you’re a fast walker, it may be even faster than riding the carriage. As I said, time here stand still.

Horses rule the island. They have only one physician in the whole island, but they have three veterinarians available here. So you know where their priority lies in this place. 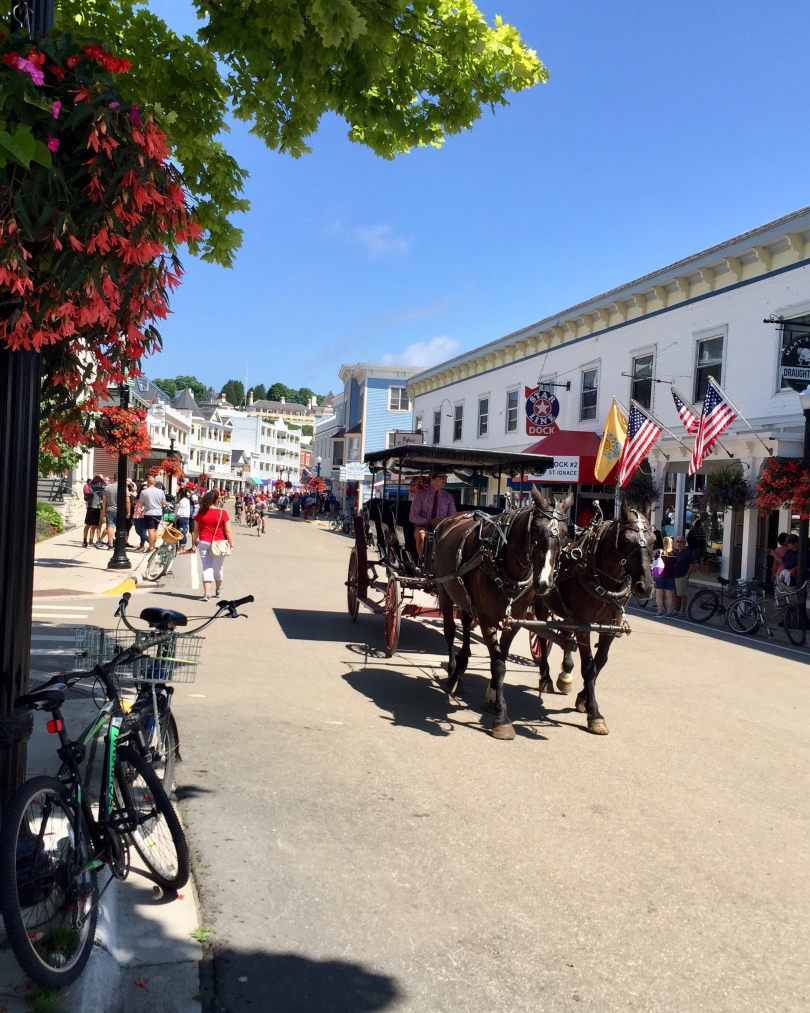 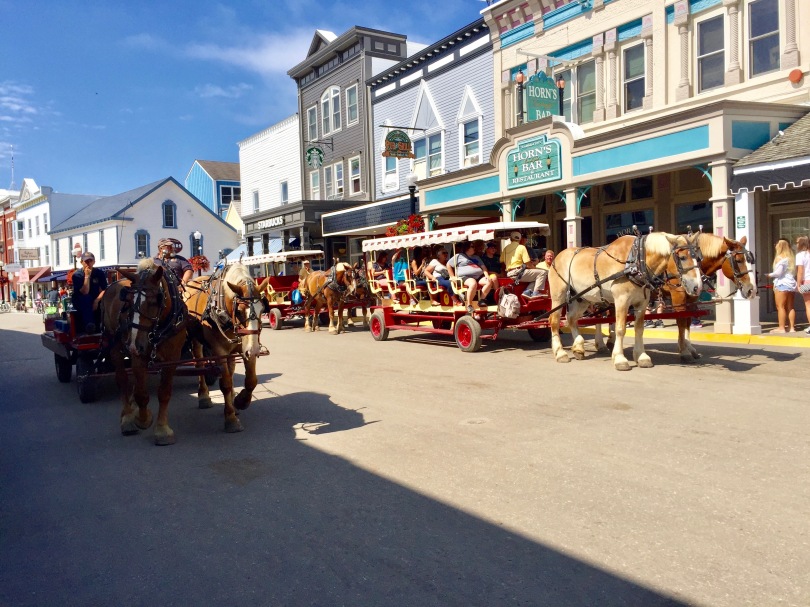 One of the down-side of having many horses walking the streets, is that the roads are littered with their manure. 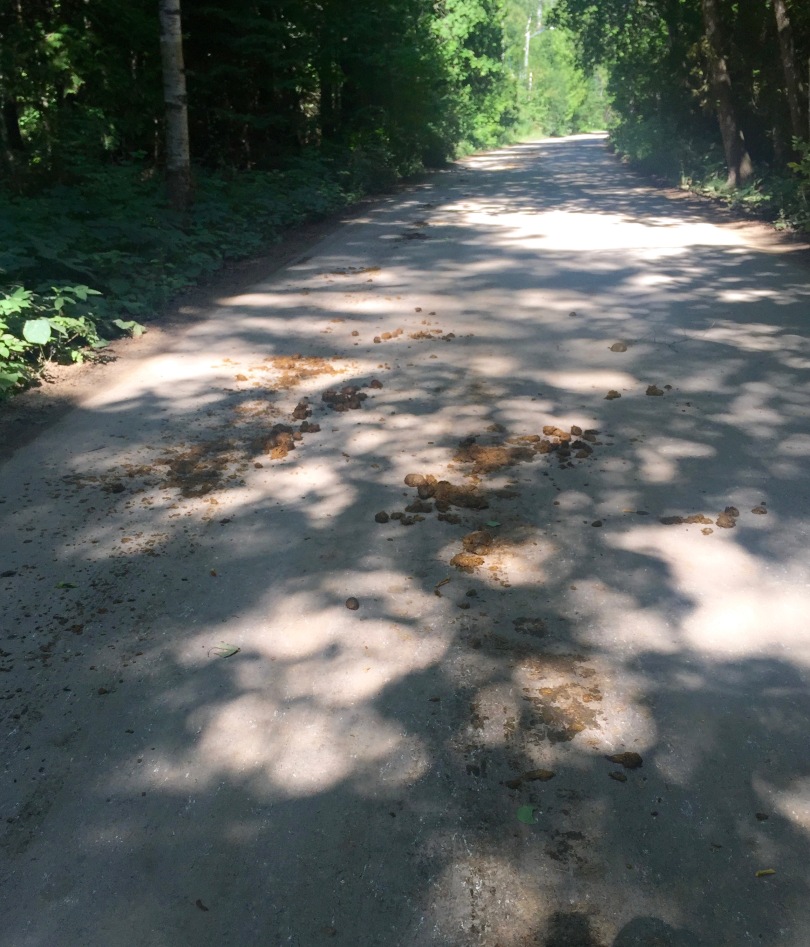 The smell is undeniable and sometimes can be overwhelming. But there are many people employed here as a “pooper-scooper.” They even have a mechanized street sweeper or cleaner. Of course it is also horse-drawn (photo below). 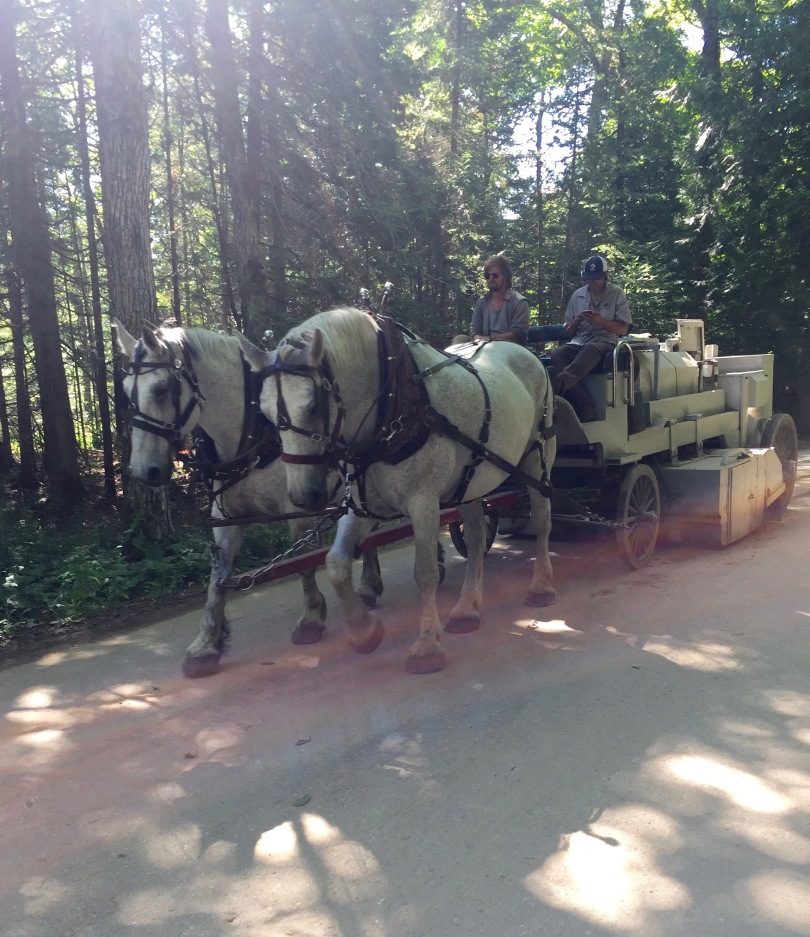 Beside the horse-drawn carriage tour, another faster way than walking, to tour the island is to go biking. And that’s what my family and I did. The whole island is only 8 miles around, though there are some steep hills that may be challenging to ride up. 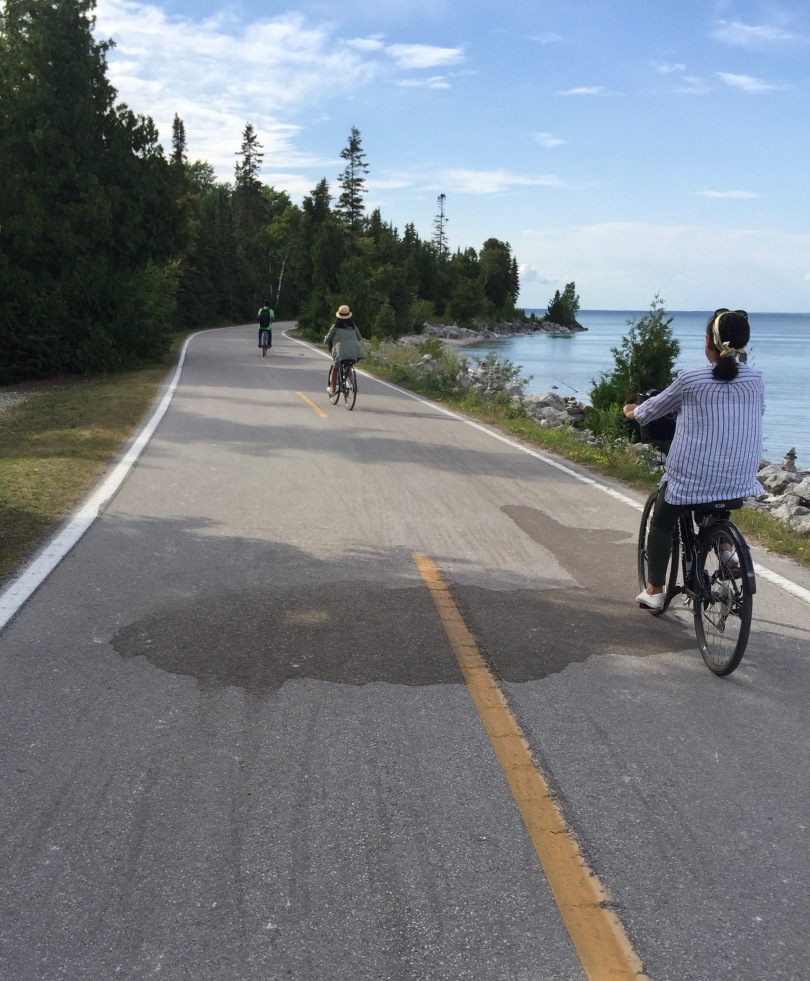 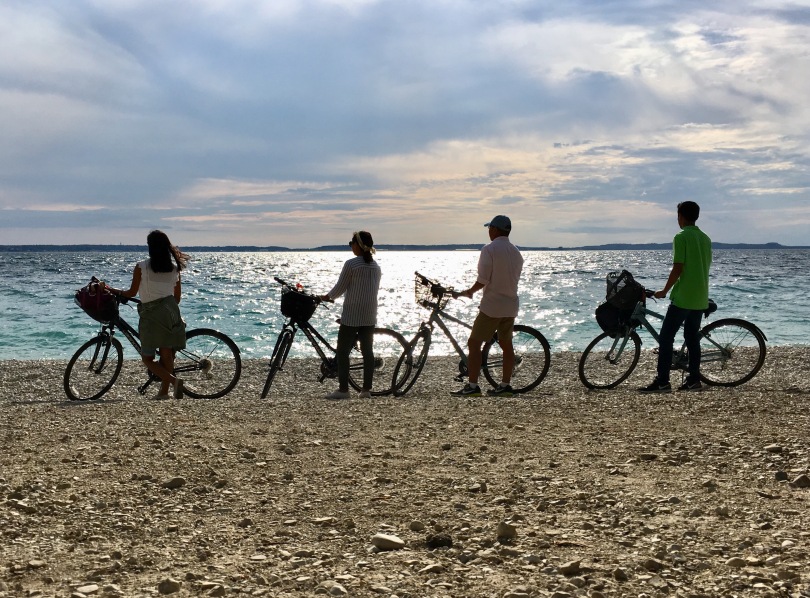 One of the most iconic place in the island is the Grand Hotel which opened its doors way back in 1887. As the name implies, it really is grand. It even has its signature horse-drawn carriages available for their patrons. 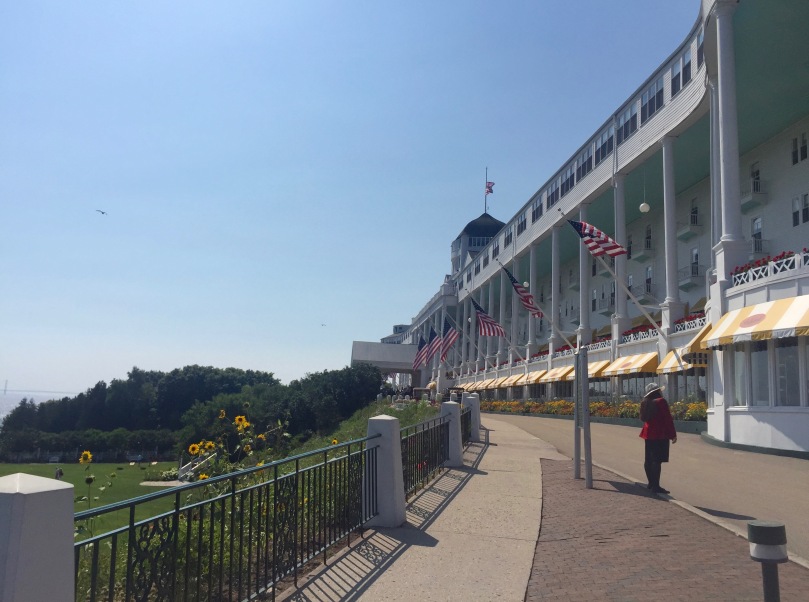 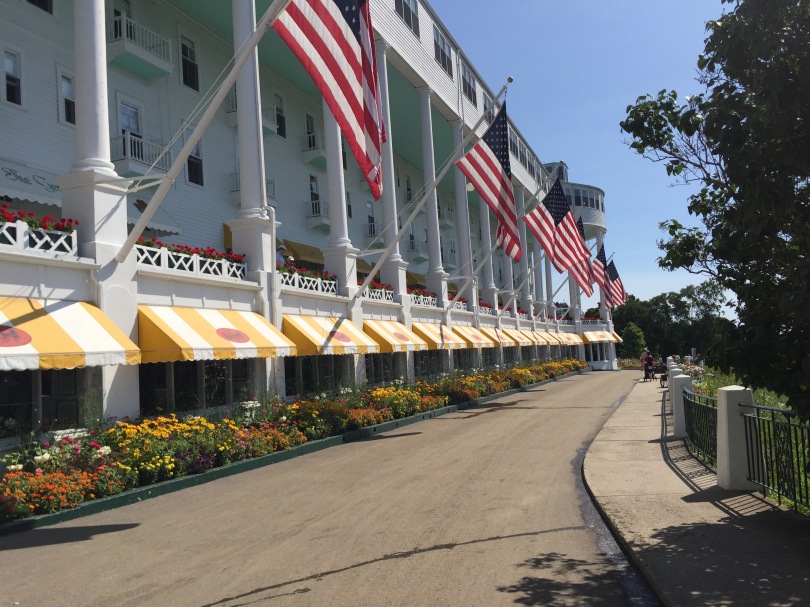 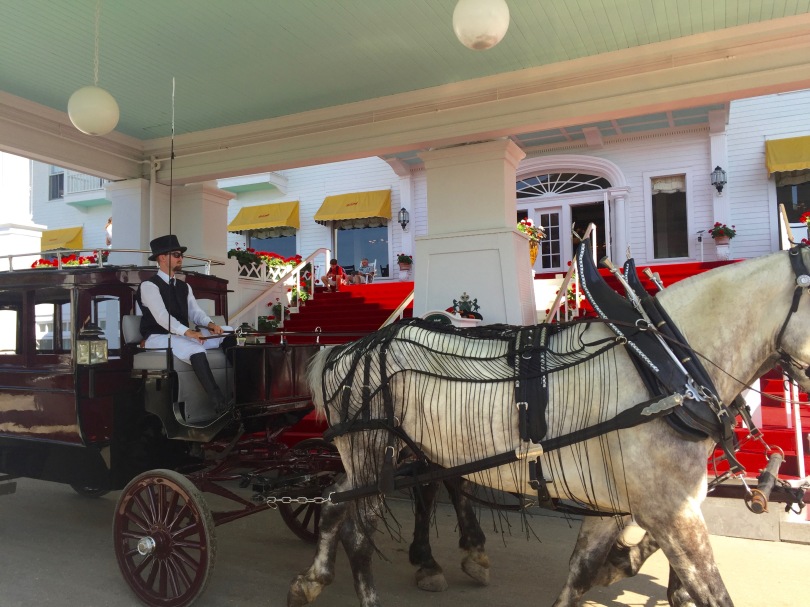 This hotel has hosted many presidents, dignitaries, and famous people in its existence. Even if you don’t stay in this hotel (as it is a little pricey) you can still tour it for a minimal fee. It remains one of the most visited place in the island. 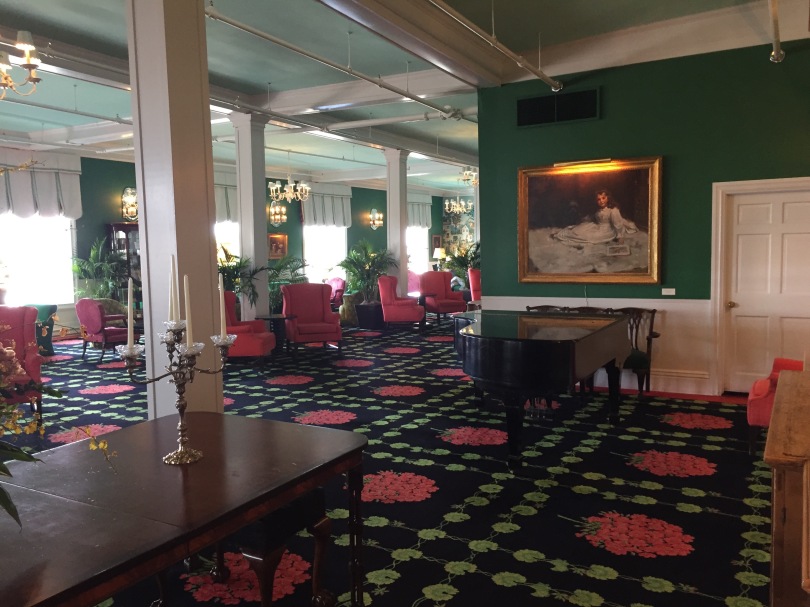 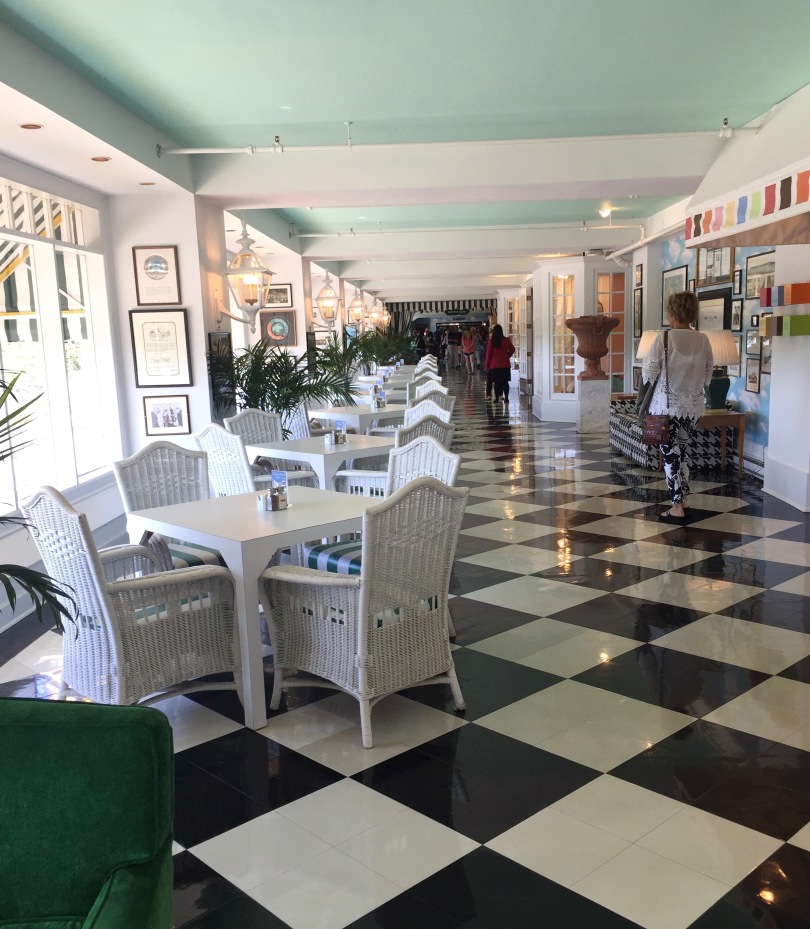 The hotel is also known in the popular culture as this is where the classic movie “Somewhere in Time,” starring Christopher Reeves and Jane Seymour, was filmed. The film is about a time traveler who fell in love with someone in the past. They chose this location for the obvious reason that the hotel have not changed much even in the passing of time. 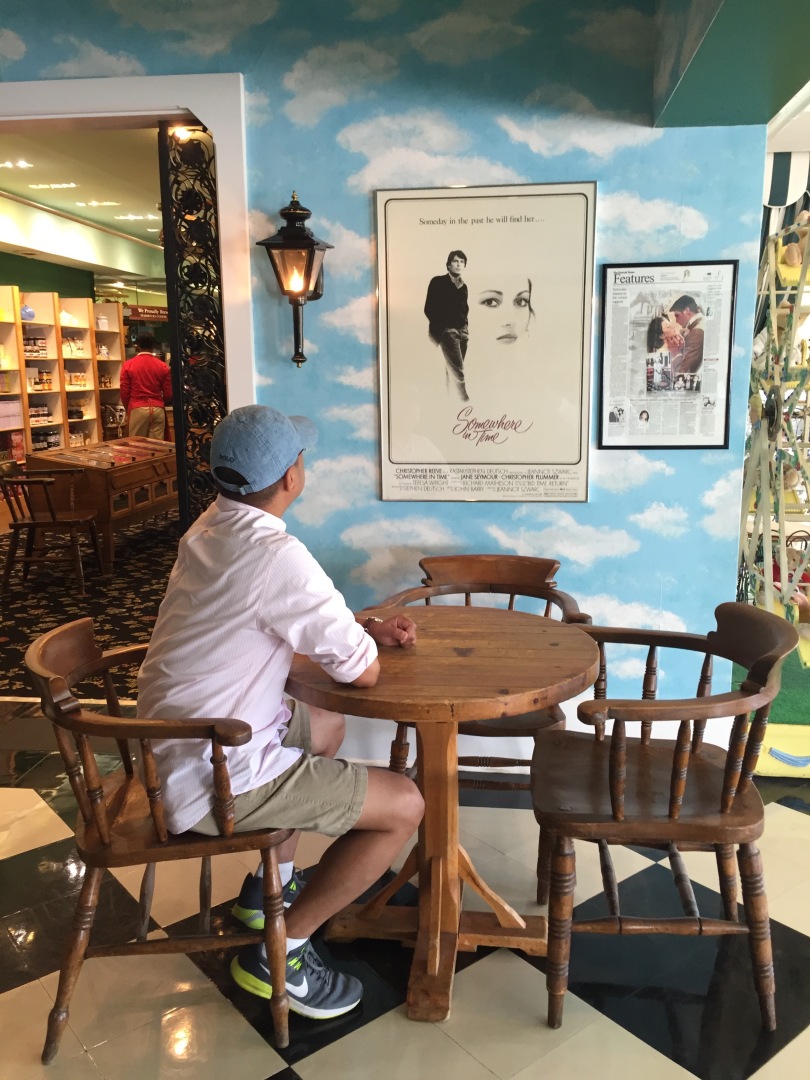 Overall, we really enjoyed our trip to Mackinac Island. Even though we are not time travelers, perhaps we can be considered as such, as we felt like we visited the “past.” And we definitely fell in love too from something in the “past.” 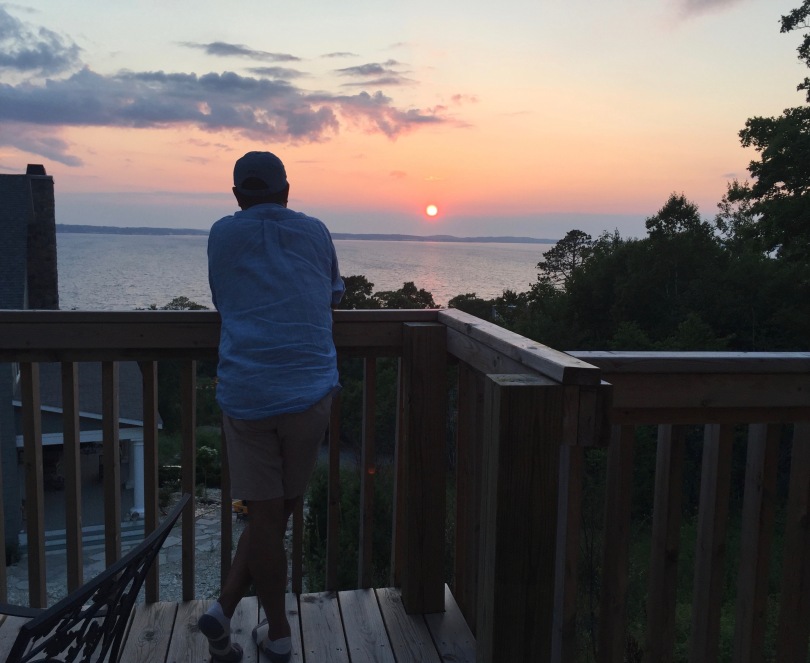