There are many things that an iPhone or any smart phone, can do. It can let you talk face to face with someone across the globe. You can do your research and write your thesis with it. You can check the weather of any place around the world, even on Mars. It can be your personal secretary and will remind you of your appointments and special events.

But one thing an iPhone can’t do. It cannot swim. That I learned first hand.

We were in Palawan, Philippines, and were doing island hopping. Yes we hopped like bunnies on islands. No, we did not.

Anyway, we were visiting this one particular island, and I wanted to get a better photo of my son while he was in the water. So I waded in the waist-deep ocean water with our SLR camera in hand, trying so very carefully to keep it above my chest so it would not get wet.

But I forgot that my iPhone was in the pocket of my swimming shorts!

Call it a senior moment. Call it forgetful. Call it distracted. But in our vernacular, we also have a term for it: Tanga! (And it does not mean underwear.)

So my iPhone swam in the ocean. And it drowned.

where my phone took a swim

Right after I realized what happened, I turned off the phone immediately like what I heard from self-proclaimed experts. I wished to do mouth to mouth resuscitation on it, but I knew it was of no use.

I also heard of putting the phone in uncooked rice right away to try to draw out the moisture, just as what I’ve seen in some videos before. Though I don’t really know if that was proven effective. But we were on an island. The only rice we had, was left-over cooked rice from our lunch. I don’t think that would do.

Several hours later, after we’re done from our island hopping, and we’re back in our hotel, me and my nephew tried to do surgery on my phone. My nephew had a kit to open iPhones, though I’m not sure why he carry along these particular tools.

So we opened up my phone, and tried to shake off the salt water inside. We blew it dry with a hair dryer. Yet I could already see signs of damage inside it. 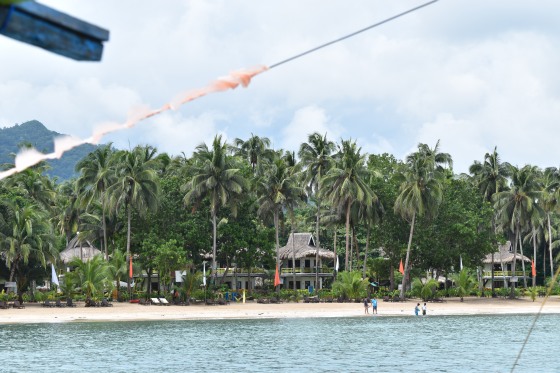 The salvage surgery was unsuccessful. No signs of life in my phone. It was dead on arrival.

I left my phone turned off for several days, still hoping that it will resurrect to life. After a week, and only after we got back in the US, that I brought my iPhone to the Apple store, in their Genius Bar.

After running diagnostics on my phone, it confirmed what I knew all along. My phone was dead.

They cannot even retrieve any data from it, including all my photos. My videos and photos of me on the zip-line were gone, and now I have no proof that I did it. 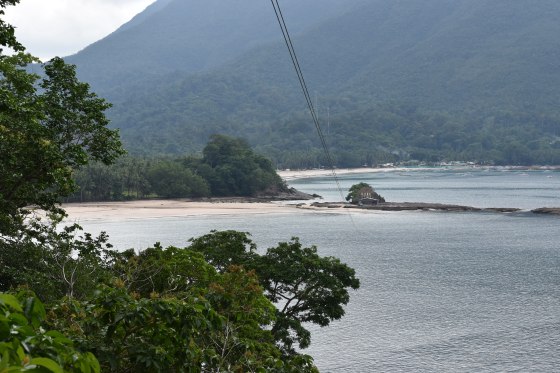 zip-line where the iPhone rode

I tried to rationalize my loss. Well, it was a 4-year-old phone with a 4-year-behind technology. I needed an upgrade and I was planning to replace it soon anyway. Yet, I have drawn attached to that phone, sentimentally and literally. I never left home without it for the past 4 years.

I guess, I have nobody to blame but me. Or maybe I could blame the iPhone engineers, on why they did not teach the iPhone to swim. Even in ocean waters.

Maybe the next generation of iPhones will. I hope they teach it how to fly too, in case it fall off while I’m zip-lining or bungee jumping.

7 thoughts on “Casualty of Vacation”