Sunday morning, it was a little past five, when I was awakened  by a text message on my cellphone. It said it was urgent. I rose up from my bed and made an overseas call to my home in the Philippines.

It is December now, “tis the season to be jolly,” as the song goes. Twenty-three days till Christmas. As I made my phone call, it was nice to hear the voices of my family back home that I have not seen for a while. Nice to keep in touch with them, for after all it is the holiday seasons. But not like this. Not on this unforseen circumstances.

As I hung up the phone, I looked out the window. It was still dark. And foggy. And cold. What a dreary day.

But I could not get back to sleep. My mind was racing and my heart was troubled. So as soon as the faint light of the morning have broken, I decided to go out for a run. Yes it was foggy and gray outside, but I needed to clear my head. I needed some time to be alone.

As I was running outside, the visibility was really awful. The haze hung like veil in some kind of Alfred Hitchcock movie.

But it was more than fog that obscures my vision. For my eyes were also misty. And I was unabashed to let the tears flow, for there was nobody there except me, in the solitude of the gloomy morning.

I was alone. I felt alone. 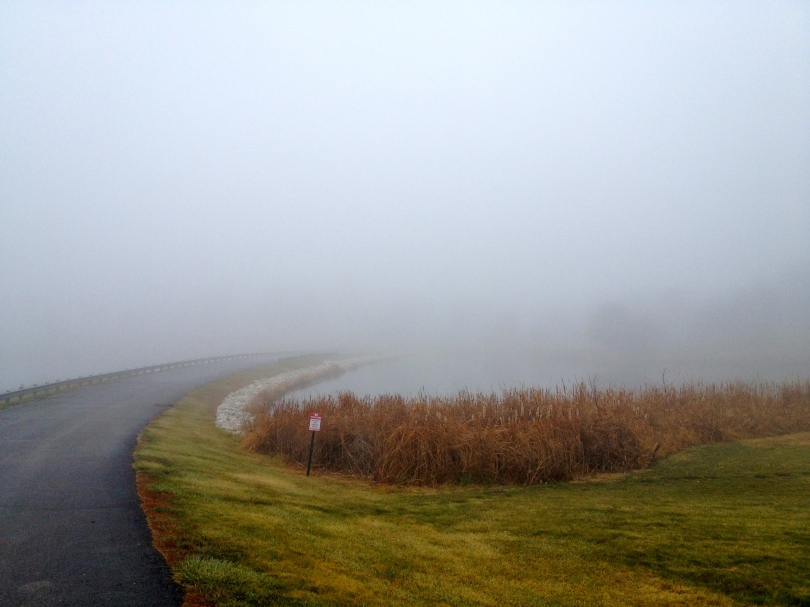 Yet I continue to run. As I pant, I started to feel a certain kind of warmness. Warmness that was more than the sweat in my brows. As I breathed heavily the cold foggy air, I felt such peacefulness and assurance.

Then I heard trumpeting sounds. No, it was not the musical instruments. As I looked up I discerned a flock of  trumpeting geese flying in the overcast sky.

And then when I was passing through the isolated and lonely gravel road, I heard voices. Yes, human voices! As I looked back from behind me, I detected shadowy figures emerging from the haze. Runners!

It was so unusual for me to encounter some other souls in this road, let alone to see a wave of runners (there were seven of them that passed by me) wandered in this deserted road.

It was not the geese. Nor it was the runners. Something more than these made me feel that I was not alone anymore. Suddenly I felt the morning fog warmly hugging me, reminding me that I am never alone.

Somehow in my somber moment, I felt His presence there.

(*all photos taken with iPhone)