Many runners regard their endeavor as a religion. They are so devoted that they may be members of the Nike’s Witness, or the Church of Later-day (and Early-day) Runners, or the Cross-Country Faithful, or the 7-day Joggers. Maybe I am a member of this creed.

Then there are other people who treat other things as their religion. Like eating. They perform this as if it is their sole God-given duty. Well, I will not divulge on this subject any further, at least for now.

But why shouldn’t we treat running as spiritual exercise? I mean, literally. 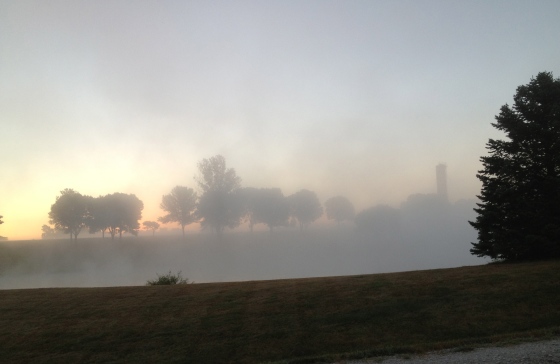 My training for the half-marathon for this fall is in full swing. I have been doing the short runs (3 miles) at least twice or thrice during the week, and one long run (5 miles and increasing by a mile every week) on the weekend. I am currently on 8-mile long run.

That is a lot of time dedicated (or wasted?) on running, you might say. What else can you do with that time?

For me, I use that time to clear my head. Or do some serious thinking too. With the beautiful scenery around me, my creative moments (due to relative lack of oxygen?) come during those runs. I have even composed in my head, snippets or even whole article blogs during those period, and I just have to download it into the computer when I sit down.

But more recently, I have used those times running alone, as my meditation hour – communing with nature and its Creator. We certainly need those quiet moments. Not much talking, but listening.

Not too long ago, during a heat wave in our area, it was so hot that we had a string of 100-degree F days. It was so dry too that we had no rain for weeks, and we were in a drought-like condition, much to the demise of corn and soybean fields here.

Then one morning, as I went out for my run, the surrounding was all wet from the rain the night before. The parched land was soaked with water. It was breezy, cool and refreshing. I was grateful for the rain, as the farmers in our area were as well.

As I was running, I encountered a deer who perhaps was also thankful for the rain. She stood motionless as I passed by, just staring at me.

May we all have a blessed week.

(*photos taken with an iPhone during my morning runs)