Last week, some Filipino friends of ours from the Tri-state area visited us here in Iowa. Then we rented a big van, and all 12 of us crammed in it, and drove down to Colorado. One of the friends who was with us was my daughter’s piano teacher, so some of the places we visited have music theme.

Colorado means ” colored red” in Spanish. The name is probably due to the fact that many of the mountains and rocks in this state is red. And what else could be more representative of this than our first stop: Red Rocks Amphitheatre in Morrison, Colorado. 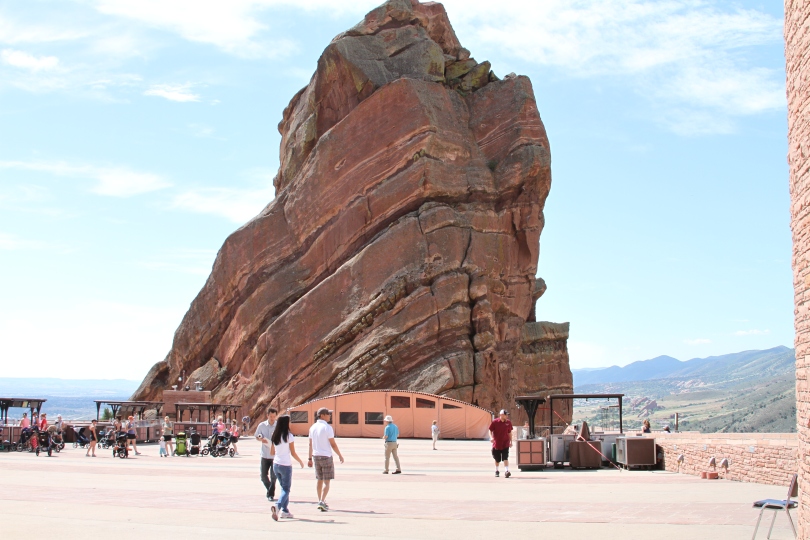 This is a rock structure that was transformed into an open air amphitheatre. Many famous artists have performed in this theatre, from renowned opera singer Mary Garden in 1911, to the Beatles in 1964, and to U2 in 1983. It is still one of the most notable concert venue to this day.

But when there is no concert being held, it is a visitors’ haven and exercise enthusiasts’ playground.

From Red Rock, we drove to the Rocky Mountains. We passed through Boulder where we saw planes dousing water and chemical to control the wild fires in the mountains. (The biggest wild fires were in Colorado Spring, which we did not visit for obvious reasons. Our thoughts and prayers goes to the people who were affected by the fires.)

The highest point of the Rocky Mountains was about 12000 feet above sea level. Here we felt that the air was thin, and that made breathing difficult and made us feel giddy. The weather was also very volatile high in the mountains. It was warm and sunny one minute, and then raining hailstones the next, which we really experienced while we were there.

From the Rocky Mountains we continued on to Vail, Colorado. It has an elevation of more than 8000 feet. This town is known for its Ski Resorts. But even during summer, the town has a lot of activities and events to offer. We made this town our base camp for 2 days.

On our third day, tired and weary from all the driving and traveling, we went to Hot Sulphur Springs, Colorado for few hours of relaxation. The place was originally a summer campground for the Ute Indians who came for the hot springs. It was later bought by a newspaper mogul in the late 1800’s and turned it into a resort and spa. Today, the Hot Sulphur Springs Resort and Spa remains one of the nation’s oldest, largest and finest natural hot mineral springs destination. 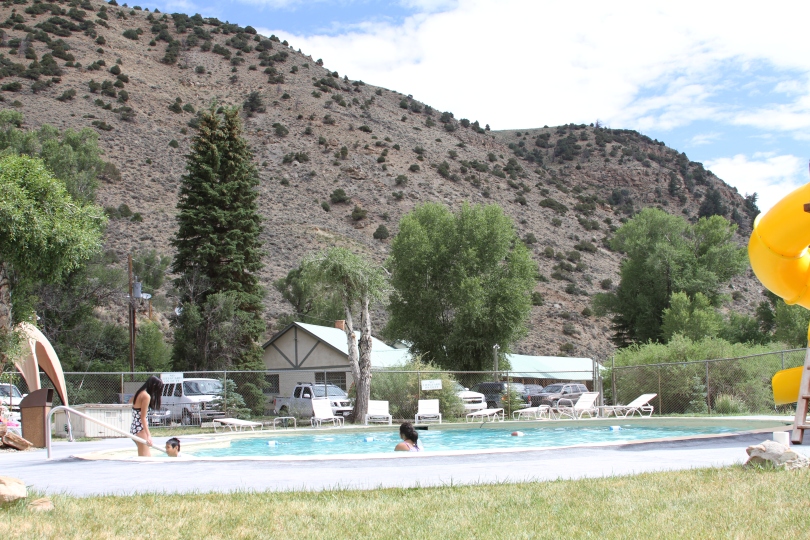 The resort has 22 pools and private baths. These pools are believed to have healing powers and dipping in them was definitely relaxing. The temperature of the different pools ranges from 98-101 F, which is nice and warm, to almost scalding hot 108 to 110 F. You almost can cook an egg on that!

After immersing and unwinding in the hot springs we went off to Aspen. The drive to Aspen was beautiful and scenic as well.

Aspen is also known for its Music Festival. Even the venue of the concert, the Benedict Music Tent, is interesting. It  is the world’s first concert facility that combines the openness and romance of a tent, with the acoustic integrity of a concert hall.

The concert was featuring George Gershwin music. Gershwin is an American composer whose many of his works were adapted to Broadway musicals and Hollywood movies.

It rained during the latter part of the concert, and the pitter-patter of the rain and the roll of thunder, which you can hear through the tent, added an interesting twist when the symphony was playing “Rhapsody in Blue.”

On our last day in Colorado, since my daughter has not practiced piano for more than 3 days of traveling, and she had a recital coming in a few days, our music teacher friend decided she needed to practice even for 30 minutes. But since we did not pack the piano with us, we have to find a place where she can practice. That was when we made an unplanned stop in Denver to find a piano store. Yes, that’s how dedicated they were. Practice, practice!

When we found a place, we asked the owner if we can use a piano to practice, and he kindly directed us to the recital hall. That was when our friend, the music teacher and also a concert pianist got excited. She was thrilled because the piano was a Bosendorfer. Because I don’t know piano I asked her what so different about this piano, and she told me that it was like a top-end luxury car of pianos.

I agree, it has a rich sound to it. But when I learned the price of the piano my daughter used, it floored me! It was so expensive I can buy a Porsche car. In fact it was worth two (not just one) brand new Porsche Boxter! Now we’re talking. And we practiced on it  for free!

It was indeed a long drive but a delightful one. And it was special because we did it with dear friends. We even had old original Pinoy music (OPM) playing in the van to spice up our reminiscing of our bygone days, as we enjoy each other’s company during this trip. I was also amazed that I did not hear any of the kids say, “Are we there yet?” They had such a good time, that believe it or not, they even amused themselves by playing hide and seek inside the van!

Surely this road trip was fun and memorable. And just like so often in life, it is not always the destination, but it is the journey that really matters.