I already stated in a previous post that I really don’t like airports and terminals, because I associate them with goodbyes and separation. Just ask any overseas worker or an expat, and they most probably will agree with this sentiment.

Well there’s another reason that I abhor airports and terminals is because of the wait and the time-killing involved especially during long layovers. Not to mention if your connecting flight is delayed, then it can really be agonizing.

My last travel back home to the Philippines, which involved a total of 17 hours of flight time, with 2 connecting flights and layovers, includes a total of 23 hours from my airport of origin to my airport destination. That means I sit for 6 hours in an airport terminal just waiting. Six long idle hours waiting and doing nothing! 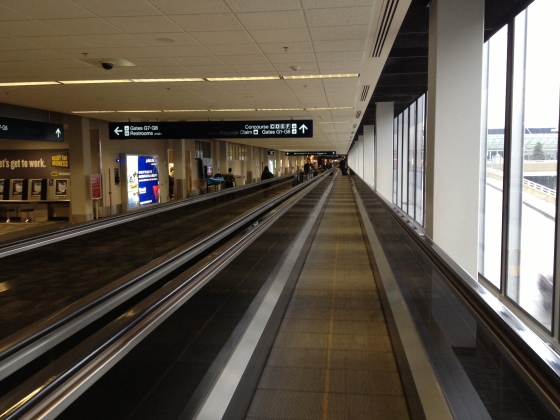 Until I happen to have my layover in this terminal gate in Minneapolis, that killing time became a less tedious experience. In fact, it was even enjoyable.

The place was highly wired, with several televisions and many available (yes, empty!) seats with each individual iPad on them, with fast internet connection. The best part is it is free to use with no time limit as long as you are still in the terminal. Maybe they should offer this convenience with a cot so a weary traveler can even lie down and relax. That will be a dream layover!

The annexing restaurant offers the same convenience of free iPad use and internet connection, with added benefit of ordering delicious food (though a bit pricey just like anything in an airport) and eating it in an unwinding atmosphere that you would not feel that you’re in an airport gate. But in truth, the terminal gate is a look away so you don’t have to worry of being left behind. However with these amenities, maybe you would like to be left behind.

And what do you suppose I did with my almost three hours of layover in this terminal? I could not help it. I gave in. No, not the part of being left behind.