I grew up in a city.  I spent the first 27 years of my life thriving in the crowded city of Manila. I also lived for more than three years in New York City, the ultimate urban jungle. Not to mention also my short stint in Los Angeles. In spite of the fact that I am a city kid, I do love the wild. No, I don’t mean the crazy things people find in the city. What I mean is the wilderness.

Camping and mountaineering may not be a big cultural thing among Filipinos, but it has become a tradition in our family. In the school where I went to, camping is a yearly event. And I went to each one of them starting from 4th grade in elementary up until I finished high school. We had church camping as well. Going mountain climbing was also part of these trips. I have climbed to the peak Mt. Makiling, Mt. Makulot and Mt. Banahaw in the Philippines, and they were enchanting. A far cry from Smokey Mountain of Manila.

It is not surprising that I continued this camping and mountain hiking tradition with my own family here in the US. We went camping, almost every year, when we were living in New Jersey, New York, Florida, and now here in Iowa. It does not matter what season, for we camped in the spring, summer, fall and even early winter. Last weekend, my family, together with three other families (total of 11 kids) went for our spring camping. 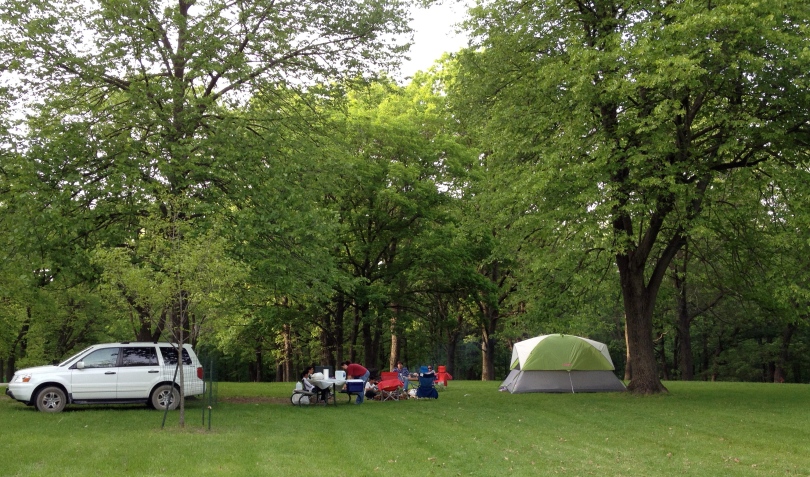 Camping may not be appealing to many people. Who in their right mind would leave the comfort of their home, and their warm bed, and go and sleep in a tent with bugs and all, and freeze in the cold night? And call it fun? We do.

The weather was perfect during our camping, for it did not rain, though it dip down in the 40’s Fahrenheit in the early morning when we were out in the wild. But we were prepared and well-equipt.

We have a big and spacious tent, and I would not say that it is not without comfort.

We have air mattresses, so we don’t have to feel the rocks and uneveness of the dirt when we lay down. Our kids have warm sleeping bags that can be toasty inside even when the temperature is down in the 40’s.

We even have a lantern inside the tent. 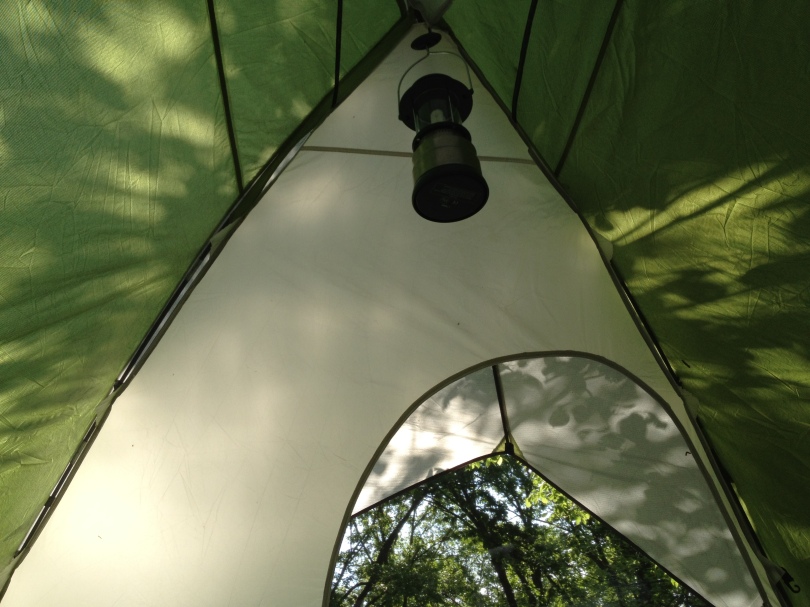 How about food and preparation of food? I would say that we are far from cooking like the cavemen did. Of course we can cook our food the old fashion way in the open fire.

Cooking in the open fire is fun, but it can take long and laborious. So for good measure we also brought a portable propane gas stove. The modern conveniences of camping!

We also brought lots of prepared food that we don’t have to cook, like adobo, brownies, cookies, and even cake. I know, I know, not your typical camping meal. So we have bountiful food that we are far from going hungry.

What is camping without taking a hike through the forest and mountain? This year we went to the Backbone State Park near Lamont Iowa. It is Iowa’s oldest state park, dedicated in 1919. The park is more than 2000 acres and has 21 miles trail for hiking. It also has cliffs that climbers and rappellers can find challenging.

The trail even has a cave. It was not a big cavernous cave though. It was small and tight that you have to bend and crawl in the dark most of the way. Too claustrophobic and muddy for me. And it has bats. Yes, a bat cave! But no bat mobile in there.

After crawling in the cave and getting dirty, we headed down the nearby creek to clean up. The water is clear and cold.

We did not encounter much wild animals, just swarm of insects and birds flying around that filled the trail with their bird calls. No cougar, no elk, no bear (yes, there have been reports of black bear in Iowa), and no beaver that we spotted. (Though there are a lot of cows grazing in the prairie just outside the State Park.) But we did see sign of beaver marks around.

After all the walking, climbing, jumping, and crouching, we needed some break time.

I know these camping trips and hiking can be exhausting, but they are also rejuvenating. Until the next call of the wild.