My alma mater have seen renovation and updates in its structures and facilities over the years. After all, a more than 400-year-old establishment needs to keep up with the changes of time.

Earlier this year, when I revisted my school, I have noted some changes in the campus that were not present when I left its portals 25 years ago.

If you enter the campus through the España entrance, the first structure that will welcome you is the Arch of the Century.  Somehow adding this low wall bearing the university’s name (photo above) at the side of the arch, gives this archaic landmark a fresh look. 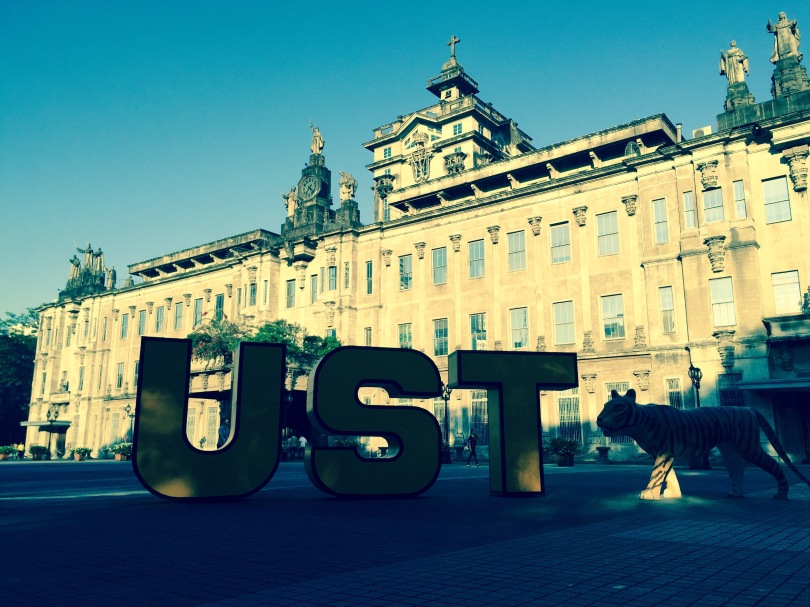 In front of the Main Building, which is arguably the most recognizable building on the campus, there is now the huge “UST” letters, as well as a growling tiger (above photo) prowling on the university’s grounds.

Even the plaza where the statue of Father Benavidez stands, got some modern framework around it giving it a contemporary look (photo below).

I believe many of the makeover and updates in the campus were constructed right before the 400th year celebration 5 years ago.

Below is the landmark commemorating that event.

Even the walkway that I passed everyday during my time in the university, has a different look. I don’t even remember that it was named Burgos Lane (photo below). I also like the “No Smoking” sign, which I hope is being followed and enforced.

Besides the changes inside the campus, there are also noticeable changes around and outside the campus. For sure the skyscrapers towering around the university campus were not there during my time.

Then a couple of days ago, somebody posted a photo of my alma mater. I would say that this is the most ambitious and spectacular update to date that I have ever seen.

They added an ocean to the campus!

Now it can claim to be called the University by the Bay.

P.S. On a serious note, I pray for the safety of all who are affected by the heavy rains and flooding in the Philippines.

(*Photos I took and processed with an iPhone, except for the last picture which was taken by Michael Angelo Reyes and I grabbed from the internet.)