Change. That is the only constant thing in this ever-changing world.

Not too long ago, we cannot get by our daily lives without the typewriter, mimeograph machine, telephone booth (not just Superman), cassette tape recorder, floppy disc, and film negatives. Do you even know what they are?

In the world of medical radiographic images, the same is true. In our practice, rarely do we see a real printed x-ray film nowadays. Instead, everything is now digital or electronic.

Gone are the days when we have to wait for several minutes for an x-ray technician to develop the film in a dark room. Then wait for it to dry. Then hand you the film. And then you have to find an x-ray view box to hang it so you can read it.

Today, we view radiographic images digitally through PACS (Picture Archiving and Communication System), which is a network of computers used by radiology department, that we can access through our desktop, laptop, tablet, or even our smart phone. And if a referred patient comes with an x-ray taken by a radiology department not in our network, he brings in his x-ray images in a CD that we can load and view.

However the other day, a new patient referred to us came in with a real copy of her chest x-ray film. A real film!

I have not held one of these for a while. I missed the feel of its smooth texture on my fingers. The crisp sound of the film as you pull it out of the envelope and wave it softly in the air. Its peculiar slight acidic scent (from the x-ray developer and fixer chemical solution). The unmistakable exotic taste of its…..ah, er……. no, I have not done that.

Who knew that a plain x-ray film will bring me such nostalgia?

As I hold the x-ray film in my hand, I looked around for a viewbox (negatoscope is the technical term), but can’t find one. I guess they don’t install them anymore. I was in one of our newly constructed multi-specialty satellite clinic, and they don’t have a negatoscope in the whole building. None. Zilch. Nada.

So how did I view the x-ray?

I held the film against the bright window and squint my eyes a little, just like the “old” days. 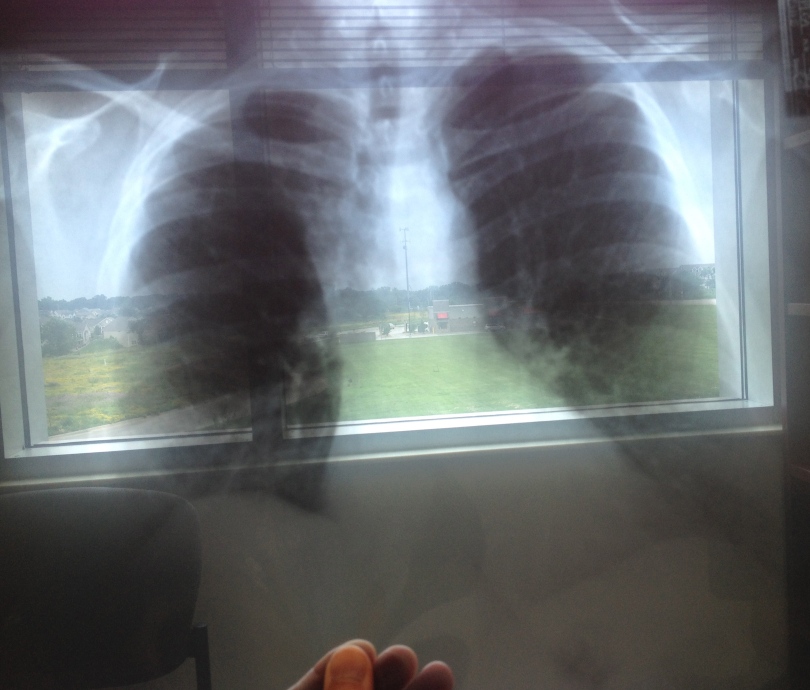 Right after graduating from medical school, almost twenty-five years ago, I worked in a small (and I mean really small) rural hospital in Plaridel Bulacan, in the Philippines. There whenever I ordered an x-ray, I even helped with shooting and developing it. That’s why I cannot forget the aroma of the freshly developed x-ray film. And while the film was still wet, I would hold it against the light, squint my eyes, and read it.

That was just like yesterday. Yet so much have changed.

(*photo taken with an i-Phone; and in case you’re asking, the chest x-ray was normal)